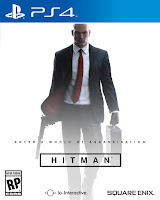 I've held back on this review for a little while. I have had it since launch and have played a hell of a lot of it. But the episodic nature of this game irked many a gamer and I wanted to be completely sure of my thoughts on this game before I set out to sway you guys one way or another.

By the time all of the episodes have been released there will be a total of six locations for you to go on a killing spree in. This doesn't include the ICA training facility that is included in the Paris episode. I mentioned the pricing at the beginning of this review and honestly believe this lead to more confusion than was necessary. IF you bought every episode as it came out, on the basis of how much you enjoyed the previous one or whatever it would cost you £51.94 (well according to my calculator anyway). Get Paris and then decide to upgrade? You're looking at £48.98. So if you think you might enjoy what Hitman has to offer the best option would be to get the full experience. Want to hedge your bets a little? Go for the full upgrade after seeing what Paris has to offer. I see no reason why anyone would buy each pack separately if I am honest, though I suppose it does look attractive to people of limited means. £7.99 a month is doable for most people.

Anyway, lets get away from all of that for a second and talk about the game, shall we?

I was going to write up a dissection of what each different location offers, but that would be time consuming and pretty damn boring to read, I imagine. Instead I want to talk about the overall level design. Hitman is a great example of what brilliant level design can do for a game. This game was lambasted by many for offering just one level for £7.99 at first and now my Twitter feed is full of congratulations to Squenix each time a new locale is released. The levels are intricate, beautiful and full of things to discover. Paris has been out since May and is the smallest of the maps so far (save from the training facility, which is also fantastic) yet I can still find new ways to approach the objectives, still find myself getting lost or finding new corridors to explore. Paris is the only one so far that centres around just one building and it's gardens, so you can imagine how many opportunities for exploration there are in the town of Sapienza and the markets of Marrakesh.

You do hear the same voice acting in each of the locations, which does nothing for immersion in my opinion. I want to hear different voices, different accents for crying out loud. Instead, no matter where you go you hear the same fairly stuffy British accents from every person who happens to speak as you walk by. Maybe I am nitpicking, but it does take away from the exotic locations somewhat if I'm being honest.

Back in May when I first played the Paris missions, I was thinking the same as everyone else, that being "all that money for one contract?!". I had had a little play in the contract mode, but I have to be honest it didn't interest me that much, and remains my least played area of the game. So I put the game to one side for awhile and decided to revisit once Sapienza was released and then maybe write up my review. I'm so glad I did, as this review would have been going in a very different direction. After I had completed the missions in Sapienza, I decided to revisit Paris and try and do it another way. Sapienza had shown me the amount of thought that went into each level and I approached The Showstopper with renewed appreciation. Hitman really is a masterclass in level design.

After doing The Showstopper again I was hooked, but still not feeling the contracts. So I gave the Escalation mode a try. Escalation mode consists of 3-5 rounds in one location that get progressively harder. I don't know how I hadn't noticed them before. They're brilliant! Incredibly challenging but even more rewarding. They give you different targets from the main ones included in the missions, and then they give you more targets on top of the first as well as more stringent security to contend with. They're infuriating, but fantastic and I have whiled away many an hour tailing random people in each location, looking for the perfect time to strike.

My favourite thing by far about the new Hitman experience though has been the Elusive contracts. They are such a great idea for a game like this. There have been four Elusive Contracts so far (all of which I have completed, wahoo!) and these contracts run for about 48 hours. The target will ONLY be available in that window of time, real-time. If you die you don't get to do it over. That's it. You get a nice red Failed sign over the target on the game's main screen. Ouch. Actually, even after completing another one the failure will still follow you, as my partner found out. I don't know whether these will come back once the disc version is released, but I hope they do. It would be a shame for game collectors and lovers of physical discs to miss out on how exciting this mode is.

Overall I think that Hitman works wonderfully episodic. It keeps it fresh and exciting and basically gives you a new game to look forward to each month. I actually find myself wondering why the hell all previous Hitman games weren't like this. If the whole game had been released in one go I honestly wonder whether I would have played it as much as I have. As it is I find myself looking forward to the next month, to see where I'll be killing people next. If you were at all on the fence about this game, don't be! Get it. There are options to suit every wallet out there. I promise you won't regret it.