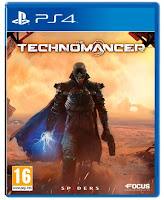 The Technomancer is available now on PS4 and is priced at £44.99.

It's been far too long since I've played Mass Effect so I'm open to any game that has any resemblance to it whatsoever, no matter how small. The Mass Effect series holds some of my fondest gaming memories and the wait for Andromeda is killing me.

Anyway when I read about The Technomancer I was pretty interested. I haven't ever played a game by this developer - Spiders - before so didn't really have any clue what to expect. I just wanted to play a space RPG again.

The Technomancer seems to have really divided people. There are a lot of my followers on Twitter who have really enjoyed their time with it, played through it multiple times and loved every second. Others are seeing it as more of a slog, something they have to get through without distracting themselves with other games out of fear of never actually returning to it. I don't quite understand how this game could be so divisive, it isn't like it has tried to re-invent the wheel and scared people off that way and, in my opinion anyway, it certainly isn't a terrible game.

Yes, graphically the game could be a little better overall but there are moments in this game that are truly gorgeous. The biggest part that lets it down visually is the animation of the NPC's. Facial movement in general is quite bad for a game of this gen, but as I say it's nothing too terrible. It isn't the most polished game and I found the frame-rate to be a tad patchy at times, but again I feel like I'm nitpicking.

So I'll start telling you about what I really enjoyed about my time with The Technomancer. First of is the ability to switch combat styles on the fly, which gives you three very different combat experiences. You can switch between Guardian, Warrior or Rogue class with the press of a button, with each class having a different set weapon it uses. For the most part I lean more towards Guardian because I love the fluidity of the staff fighting, but some enemies really require you to be able to change it up and try a new tactic. If you time a hit just right you are rewarded with a little slow-mo flourish, which I think is much cooler when you're playing as a staff wielding Technomancer. Yes, let's not forget about the ability that is after all the namesake of the game - all of the different combat styles are supported by Technomancy which are basically electrical abilities.

This makes a refreshing change for an RPG, where we are usually forced to pick a specific combat method and stick to it throughout. We're supposed to concentrate on one style of play and use all of our skill points expanding one tree. The Technomancer still utilises skill trees, but they are more free than is usual for an RPG and you can spread them more evenly or go all out on the one style of combat.

The combat is where this game shines the brightest in my opinion and luckily Mars is populated with loads of things and people that would't mind killing you. It's a lot of fun to show them whose boss. Each enemy fights slightly differently too - some of them band together and concentrate all of their efforts on your character, whilst others are easy to separate and pick off in a one-on-one fight. The combat really is fantastic in The Technomancer. It's gritty and tactical and oh-so satisfying when you deal the final blow.

Much like Batman though your Technomancer doesn't like to kill people, and will only knock them out unless you drain the serum afterwards. This links into the karma system, that isn't unlike the Renegade/Paragon system in Mass Effect. Draining serum from people ultimately kills them and no matter how bad this person is it is frowned upon to end another life when human life is seen as precious. If you find yourself running low on serum you can drain it from other life forms without taking the karma hit, as they are killed during battle rather than just knocked out.

As is fairly usual with an RPG you can recruit people to come and aid you on your travels. Anything you do around these followers will affect their opinion of you too and this does affect parts of the story. It all revolves around the different factions and I loved the fact that you couldn't just get any old information from everyone you walked up too. People are suspicious of you. Some will crack jokes when you ask them about people they don't want to be seen to be affiliated with. Others will tell you to fuck off. It was refreshing, as all too often this is where a game can fall down in terms of immersion...why on earth would everyone tell all about the big bad?! It wouldn't happen and in The Technomancer it doesn't, you have to learn how to play the game.

Character customisation could have had a little more depth if I'm being picky. You get to pick from a few different facial presets, hair styles and then choose the skin, eye and hair colour. It works and still means there are lots of different combinations of Technomancers, but a little more option never hurt anybody.

The story is fairly interesting but isn't always so well executed and when it is stood side-by-side with the fantastic combat it really shows itself as the weak point of this game. It just isn't as well written as a lot of the other RPG's on the market - the dialogue can feel stilted and the voice acting and character animation is wooden. It's a real shame, because overall the story is pretty good, it's just the delivery that isn't. The button-mapping could have been a little better too. The O button is the dodge button whilst in combat, but it is also the skip button whilst in dialogue. At some points the game will switch seamlessly from combat to dialogue, and more often than not the combined with me attempting to dodge (mostly because I liked the animation when I was using the staff but other times it was just in case I hadn't actually killed my enemy with the last blow I had dealt). This lead to a few skipped first lines of conversation and me answering without knowing what the hell I had just signed myself up for.

For all of these little problems though I have thoroughly enjoyed my time with The Technomancer. The combat alone makes this game worth playing. But if you have a gaping hole in your life that only a space RPG can fill this one can probably keep you happy until Andromeda comes in and takes over our lives.