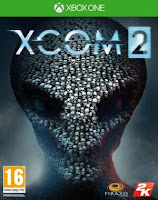 You may remember that I have previously reviewed XCOM 2 when it first released on Steam earlier in the year. I LOVED it. I had been excited for this game for months and it didn't look like a console version would be released at the time. I know, I know, how naive of me, eh?! But I HAD to play it so when a little box popped up and said that it was literally impossible to install the game on my trusty six year old MacBook Pro I had a little cry and then bought a laptop more suitable to my gaming needs. Thos being playing XCOM 2, because thankfully Sims 4 DOES work on my ageing Mac. There is a God.

Anyway as much as I loved playing XCOM 2 on my shiny new laptop I was ecstatic when I found out it was coming to consoles. I know you can use a controller with PC's but I dunno, I just feel more at home gaming on a console. Which is annoying because games for PC are a hell of a lot cheaper usually.

I'm not going to go into the story here, obviously it is the same game I reviewed on Steam, so if you want to know more about the story, click the link at the top of this review. Graphically it is still as beautiful as I thought it was then, and there are still plenty of customisation options. It IS the same game after all.

There are some issues with the console port though, that as of yet I don't know when they will be patched. It lags sometimes in game, the framerate can be incredibly choppy and the cutscenes have glitchy dialogue that chops in and out. So it's not a perfect port, by any means. Despite that though I still choose to play XCOM 2 on my XB1 now rather than my PC, so I definitely don't consider them bad enough to ruin the game for you. Don't get me wrong, the cutscene glitches in particular are so annoying but they're never that long and the game is so much fun that I kinda don't care.

If you have ever shown even a passing interest in turn-based strategy games then you need to add this game to your Xbox One collection. Technically it isn't a perfect port, but it's a damn perfect game. Even if you do want to break your controller because a shot with a 69% chance of hitting misses and results in your death.