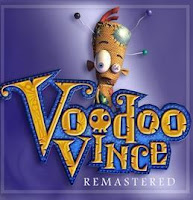 Voodoo Vince Remastered is available now on the Xbox One and is priced at £11.99.

Confession time, I had never even heard of Voodoo Vince before I received the email about the remastered version. I was a young teen when it first graced the Xbox back in 2003 and was at the mercy of my parents' choices where consoles were concerned. We were always a PlayStation household after my dad first got his hands on the original PlayStation after years of Sega consoles. Our Mega Drive is actually still alive and living next to my Xbox One, PS4 and Wii U quite harmoniously. It was actually the console we played on most over the long Easter weekend, with the whole family round.

Anyway, back to the point, eh? This review won't be commenting on what changes (if any) the remaster has given us because they wouldn't truly be my words, I'd have to read them elsewhere first. I mean, obviously, the graphics look better than I imagine it did on the original Xbox but I am coming to Voodoo Vince Remastered as someone who has never played it, or even seen it before.

So Voodoo Vince sees you take control of a cutesey little voodoo doll, Vince. He's brought to life to rescue Madam Charmaine and of course there are a number of items for Vince to collect on his journey. These can increase his life bar, give him an extra life for if you send him down one of the bottomless pits and they can give him new voodoo powers to use against the many enemies he will encounter on his travels through New Orleans. These powers are pretty cool, they all hurt poor old Vince, but luckily due to him being a voodoo doll his enemies get the same treatment a few seconds later. The first time I triggered a voodoo power I have to admit to being a little confused as I did what the game asked (pull RT + LT) and swiftly watched as poor Vince died in the middle of my screen. Luckily he came back and a second later the enemies that were circling me carked it too. Wahoo!

Voodoo Vince is a fairly standard platformer, gameplay wise. All the usual suspects are present and correct; double-jumps, spins, punches and plenty of gaps for you to fall down. I thought the tutorial was really well incorporated in this game though, there are too many games where the tutorial feels like a chore that can't be skipped and jars the experience. In Voodoo Vince you can just walk past the little pictures that appear in the environment to teach you how to suck eggs, I mean teach you how to jump, punch and spin your way around the world.

I had a lot of fun with Voodoo Vince and felt that the roughly 8 hour completion time suits me perfectly. I know that some people prefer more game for their money, but I feel that Voodoo Vince was just long enough to stop me getting bored or frustrated. I don't need - or want - to spend 20 hours on a platformer if I'm honest. Voodoo Vince is a solid little game that I think is perfectly priced for what you get. Very rare these days!