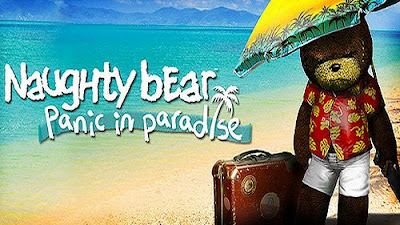 Naughty Bear: Panic in Paradise is available now on the XBLA Marketplace for 1200MSP.

Now I never played the previous disc-based Naughty Bear game. So I am not going to compare it to that game, which I hear was pretty awful. This is my first foray into the world of Naughty Bear...and I LOVED IT! 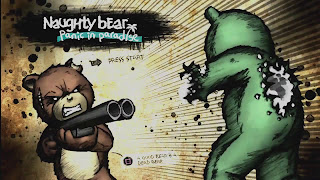 If you are against mass teddy genocide don't buy this game. If, like most of the human race, you are aware that violence in video games ISN'T REAL then you should probably give this one a go. The various amazing ways in which you can exact teddy torture are totally hilarious!

So story wise...All the teddies have gone on holiday but they didn't invite the murderous little teddy that is Naughty Bear. In hindsight that was a pretty bad move eh teddies? So Naughty heads to the island to give the teddies a piece of his mind...or impale them on a cactus plant.

Graphics are actually really good for this game, I don't know why I didn't expect them to be but I was surprised to find myself admiring the graphics. I mean nothing groundbreaking, but the world is beautiful and the stuffing that comes out of the teddies you kill is actually pretty realistic! 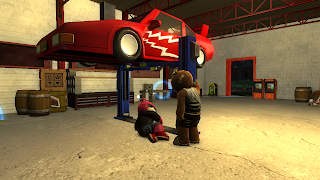 You basically go around killing bears in various sick and twisted ways. You don't have to kill every bear you see (but it is more fun) you just have to kill the 36 nasty bears that didn't invite you to the party. Each of these bears have to be killed in a certain way, be it feeding it to a giant plant or dressed in a certain way. Follow the rules to exact your revenge on the target bear and do what you want with the other ones, whether that's making them so terrified they kill themselves or dropping a car on them.

There are 11 different ares for you to run around killing teddies in, so there is a little repetition but not enough to make this game a no-go. In fact it helps quite a bit later in the game to know the maps a little, as the hits gradually get harder.

There are SO MANY different things to collect in this game. Naughty Bear has a pretty huge wardrobe. And what goes best with a shiny new outfit? Yep a shiny new weapon. With so many different weapons on offer it is very hard to get bored of this game. Hell, even without this vast array of weapons, you have so many different things in the universe to kill teddies with this game stays interesting for way longer than a lot of arcade games at the minute.

Overall I would pretty much recommend this game to anyone. It is pretty sick and dark, but it is only teddies and there is no 'real' gore like blood. A definite must buy for me!

8/10 BUY IT!
A code was provided for the purpose of this review.
Posted by Danielle at Wednesday, January 02, 2013