Zombie Driver HD is available now on the XBLA Marketplace for 800MSP.

I was a massive fan of the Carmageddon games back in the day. They were so much fun. So when I heard about this game I thought that it might be a chance to relive some of the fun I used to have on Carmageddon. It sounds like much the same game, but unfortunately I found it fairly lacking. 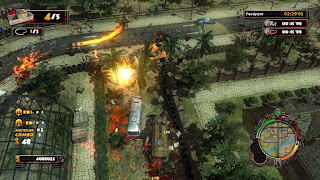 Maybe it was the top-down viewpoint of this game that made me loose enthusiasm pretty soon in. It made me feel disengaged from the action, which in a zombie game is never good. The art style is good though, and the story segments are very impressive graphically. The first video intro was very atmospheric and I found myself itching to get into the game. And itching some more as the loading times on this game are shoddy. It took so long to get into the game I was wondering whether my Xbox had crashed. Not cool.

Eventually getting into the game I was left a little deflated. Due to the standard of the intro video I was expecting a little more than what I got, which was an ok looking top-down view. I mean I like top-down games, I was just hoping for more option with this one...I think Zombie games work best when you are IN the action, not watching over it.

The controls are pretty jittery and pretty inconsistent. Sometimes I barely moved the stick and went careering off the road. Other times I was pushing the stick as far as it would go for very little movement. I could see no extenuating factors for this, it just seemed to work when it wanted. The turning circle was what irked me the most though. It is HUGE and that's not something you normally encounter on arcade style games such as this. 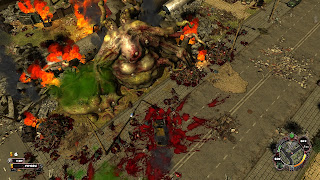 The gameplay is fun though, but I have to admit not for long. This game starts to feel pointless very early on. I dunno, but about half an hour after starting this game I was feeling pretty drained and I wasn't really having much fun anymore...I was playing for the sake of playing. All you do is drive around, mushing Zombies, shooting them when you get guns, save some people, upgrade car, boss battle...and then it's pretty much that over and over.

It is a nice open world though. I love open world, and this fact alone is what spurred me to play more. I wanted to see what else the world had to offer. Turned out not so much, but I like being able to go where you want in the world, WHEN you want rather than when you're guided there through necessity.

As I said the highlight for me was the story at the beginning and I was eagerly awaiting more of the same. That isn't what is delivered though. Story here-on-in is delivered through text boxes and a rather awful voice actor. This game turned pretty horrid round about the same time I realised this. Trying to skip the monologues proved fruitless too, no option to skip the awful drone.

I wanted to like this game. I wanted to rekindle the passion that Carmageddon gave me for gaming all those years ago. But this game failed to deliver the fun. It's just an ok game. It's ok if you have 800MSP burning a whole through your pocket an want to mash some Zombies under some tyres. That's about it.

5/10 TRY IT!
A code was provided for the purpose of this review.
Posted by Danielle at Wednesday, January 02, 2013