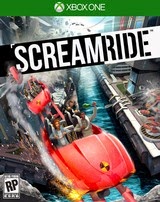 ScreamRide is out now on the Xbox One and is priced at £29.99. Yeah, ouch! The price point is one of the main reasons for the slightly lower score given to this game. I feel really strongly about recommending games I feel are worth the money, and this just feels that it's been priced slightly too high, for what is essentially an arcade game. I think it is a dangerous sign of things to come on this gen that there are VERY few games that are less than £10 to download. When we consider that when Minecraft was released on the Xbox 360 at 1600MSP everyone thought that seems a little steep. Just because it hadn't been done before. If I spent 1200MSP on an arcade game I wanted it to be the best thing since sliced bread! So I always try to consider the price the game may have been on last gen before I say that the game offers value for money.

Anyway, let's get on with the review of the game. ScreamRide is fun. Billed as a 'spiritual sequel' to the amazing old PC game Rollercoaster Tycoon, I feel that in my mind at least it was almost set up for a fall. I LOVED Rollercoaster Tycoon. But I loved all the 'boring' things about it, the day to day running of the park, setting admission prices and hiring staff etc. ScreamRide is nothing like that at all. It takes all of that away and actually the only similarities between the two games are that they both contain coasters and you can build your own in a sandbox mode. 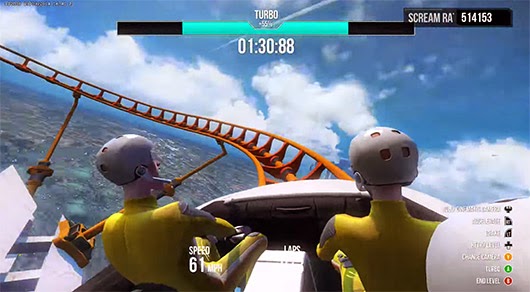 ScreamRide instead celebrates certain doom and destruction. There are three main game modes during the campaign - Scream Rider, Demolition and Engineer. Scream Rider sees you take control of a coaster on what is essentially a race track made out of roller coaster. You can use turbo, brake on the corners and lean into the bends to gain more turbo. There are blue parts of the track which sees you have to press a button at a key moment to earn more turbo too. This part of the game is really fun, but does get tired quite easily. The camera angle used is great, and it does feel like you can feel the speed that you're doing. My children watched me play this game and both squealed when we were going round a loop-the-loop or down a hill. You earn stars by completing challenges which range from getting a certain amount of points to derailing your coaster cart a certain amount of times whilst still scoring highly. 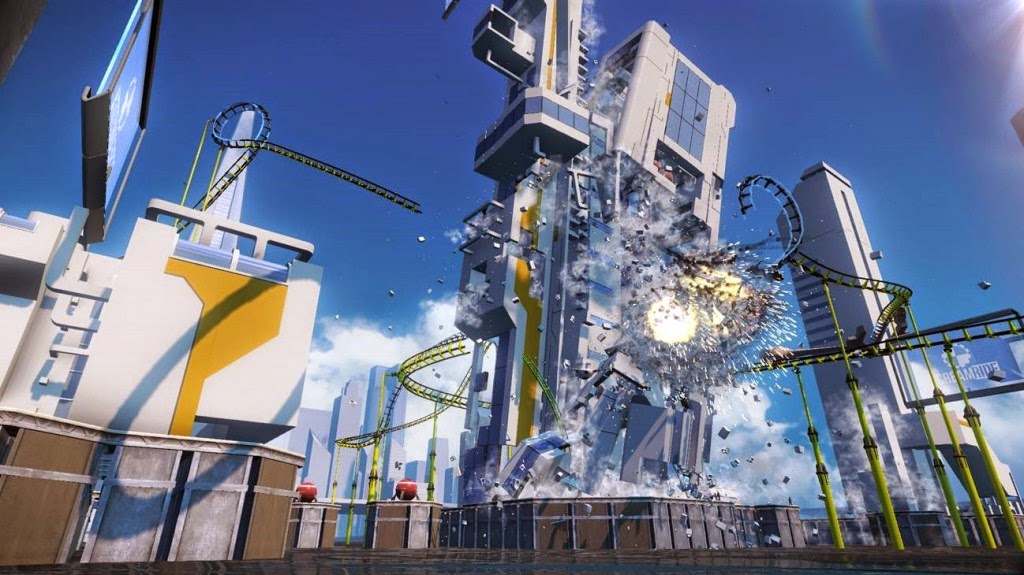 Demolition mode is like Angry Birds. You are given a set amount of carts to fire out of a revolving arm at buildings, screens, rings and trampolines. I am usually pretty awful at these types of games, and this game was no different. I struggled like mad to earn any of the commendations so I could progress. My timing is off with throwing the rem, seriously the amount of times I threw the carriage behind me rather than in front is ridiculous. Then if I did manage to shoot it the right way I still managed to miss the screens or whatever. I actually ended up getting my son to do some for me. He is that flukey kind of player that always manages to get a near perfect score when it seems like he is just throwing things haphazardly. He did really well on this game.

Engineer mode is basically a construction mode. You are given an almost complete track and told to finish it. You have to make the track reach certain lengths for the commendations and do so without losing any riders. This mode is really hard to control, or at least I found it to be so. The camera never really seems to go where you want it to go, making it difficult to place your track pieces. And my biggest problem with it is that it all feels pointless. It lacks the all out fun of being destructive for the sake of it, and it lacks the speed and finesse that the Scream Rider mode has. It just feels like it has been placed in for the sake of saying that it is like 'Rollercoaster Tycoon'. It isn't. Sandbox mode is exactly what you expect and might keep you interested for a little bit. But you will have to complete the game to unlock all the cool stuff for inside the sandbox. Without going through at least some of the story you will find it extremely difficult to enjoy sandbox mode.

Overall I feel like this game has priced itself out of the market slightly. It is polished, the graphics are nice and colourful, the music is good and it is fun but it is just too expensive! Priced around £15 and I may have been able to recommend it but for double that it feels like too much for me to say go and spend your hard earned cash on it. Wait for a sale, if it sounds like something you'd enjoy, but if you get bored easily then I'd say skip it.