I have had this game since release, so as you can tell this review has taken me awhile to write up. I bet you're probably wondering how the hell I could have taken this long to review a simple twin-stick shooter? Well here is the very embarrassing answer: I SUCK at this game.

So now my gaming embarrassment is out there lets get into the review.

Ultratron is an old-school arcade style twin-stick shooter. God that was a mouthful. Yes I speak as I type too. Everyone has been killed by robots and you are the last humanoid battle droid with one mission and one mission only, AVENGE THE HUMANS!! 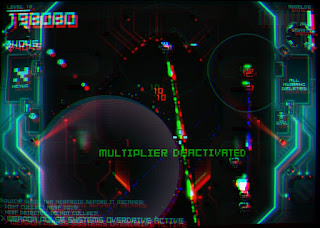 We all know how a twin-stick shooter works at this point. If you don't WHERE THE HELL HAVE YOU BEEN? You get to upgrade your battle bot if you collect enough floaty bits that disperse when you kill the nasties. The upgrades are absolutely necessary to get further into the game, so think about what you upgrade carefully. I'm not so good with the dodging so high shields was a must have for me from early on.

The game handles SO well. The controls are super-responsive and you never feel like you lost the game for anything other than your own lack of skill, which is how a twin-stick shooter should be. The screen gets mega busy with nasties and I didn't notice any lagging, the game works seamlessly. It really is a masterful example of the twin-stick genre.

There's even a coop mode. Although I didn't fare much better playing it with my partner, it is nice to be able to share the blame.

I need to get over my dislike of the pricing of the ID@Xbox games, and stop comparing them to the much cheaper XBLA and XBLIG games of the previous generation. This is simply where we are now whether we like it or not. So considering that games like Tower of Guns are £4 more expensive than this, I'd say this is a steal at £7.99. It's a great, fun little game that you will keep picking up to have just one go at. Then lose two hours to it.