SteamWorld Dig is available now on the Xbox One and is priced at £7.99.

SteamWorld Dig has been around for awhile now on other platforms. I played it first on the Vita sometime last year and I loved it. It's an easy game to pick up and while away a few hours on. That's not to say it isn't challenging though, as while yes any old dunce can pick up his pickaxe and dig up some dirt, there are few that will truly master SteamWorld Dig.

SteamWorld Dig has finally landed on the Xbox One, bringing all the digging fun to the big screens. There have been no new additions to this version of the game, it is basically a port of the previous iterations. That's not to say it isn;t fantastic though, I just feel that if you have already played it on another platform you have nothing to gain from buying it again. Unless you're a huge fan. Or need the bugger screen now your eyesight is failing. Otherwise, just keep playing it on what you have. 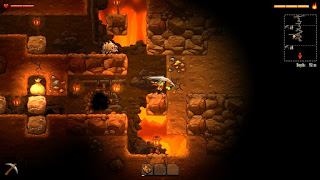 To the newcomers to SteamWorld Dig I'll say this; you could do much worse than pick this game up. I'd liken it to Spelunky, a game I got INSANELY addicted to on the 360 and ended up buying on the Vita too. You play as a little robot that comes to a little old town where his Uncle used to run a mine. He's dead and now it's yours to do with what you wish. The little town has an absolutely huge area underneath where you can mine away for hours on end. There are many secrets to unearth and lots of caves to explore, but in the end the game does become a little repetitive. You'll be up and down those shafts a lot. The game starts off simply enough, but I felt that the difficulty did spike, and that coincided with when I was beginning to lose interest, something which meant I wasn't exactly jumping at a chance to pick it up again.

Gameplay is slick and the graphic style is beautifully realised. There's not much of a story, but I think that only adds to the pick-up-and-play quality of this game. You're not gonna lose track of where you are up to with this game, but you may lose interest before you reach the end. I'd say pick this up if you haven't already played it, otherwise skip it, unless you're really hankering for some mineshaft action again.

8/10 BUY IT!
A code was provided for the purpose of the review.