Stick It To The Man (Xbox One) - Review

I bought this on the Vita awhile back and never got round to playing much of it. So when I got sent it to review on the Xbox One I was pretty happy that I skipped the Vita version. This game is now available on a multitude of platforms. So I figured, it must be pretty awesome, for it to warrant releasing on the new gen of consoles long after it was first released.

The idea behind this game is interesting enough and it is pretty novel. You play as Ray, a guy who after an accident at work ends up with a giant purple hand sticking out of his head. You know, as you do. He can use this to help him get around his environments, put stickers down and, weirdly, read peoples minds.

The art style is really cool. The game world is made up of cardboard cut outs, which honestly are pretty gorgeous. It is 2D and this game works all the better for it. The people Ray encounters are all flat paper cut-outs too and the stickers you collect to help solve everyones problems have a really neat white outline on them. The game really is beautiful in quite a non-conventional way.

The soundtrack is relaxing but I think this is quite a downfall. The gameplay itself isn't all that stressful and in parts feels a little boring. Usually a little peppy music would liven these parts up, making the game feel less of a drag until the next good thing happens, but with the peaceful tunes that run through Stick It To The Man you kinda feel like you could fall asleep. And I almost did a few times. 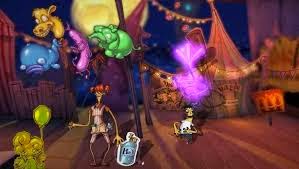 That isn't to say this game doesn't hold some appeal though. It did draw me in for a time and it is an interesting concept. It is a short game, but again I think this only counts in its favour - any longer and it would have been a real drag. As it stands, I'd probably say it could even stand to be a little bit shorter just because, after awhile I was just eagerly anticipating the end.

The annoying thing is I don't have any huge reason for disliking this game. I can't really say that I did thoroughly dislike it. I just can't say I have any particularly positive feelings towards it either. It begins to feel very monotonous fairly early on and this isn't helped by the fact that all the minds that you read seem to repeat pretty often. There are certain times where you'll need to knock a guard asleep by using a 'zzz' sticker, which you will get from reading a guards mind. But each time you have to do this you get the exact same soundbite. It would have been nice to even hear ONE other variation to this really.

I'd say if you're looking to while away a few hours with something a little bit different then this game is worth a punt. Don't go in expecting to be blown away and you probably won't be too disappointed. If you bore easily and hate repetition STAY AWAY!

Email ThisBlogThis!Share to TwitterShare to FacebookShare to Pinterest
Labels: Review, Stick it to the Man, Vita, Xbox, Xbox One