But now I am glad that I didn't buy it before. I did want it at the time it has to be said, but there was just so much going on on my 360 that I never felt like I had the time needed to commit to this game. So now I have the One, with far fewer games available on it, I am finally able to give this game some time and attention. I do still have a huge 360 backlog of games I must play, but they're being ignored now I have its new better looking big brother.

So anyway, Zen made the very clever decision (I feel, anyway) to re-release Castlestorm as a 'Definitive Edition' on the next gen consoles. The Definitive Edition bags you the DLC campaigns 'From Outcast to Survivor' and 'The Warrior Queen' on top of the base game with its updated visuals.

Now Castlestorm is MENTAL! Seriously, it is crazy. I'll try and summarise it here for you...
It's a tower defines game, with RPG elements, some hack 'n' slash gameplay and a little bit of building thrown in for good measure. I think that about sums it up, but hell grab a copy for yourself and see! This little description doesn't do it justice though, as really upon reading that how many of us can honestly say we want to play a game like that. On paper it sounds like Zen just didn't really know what they wanted to do with the game so threw everything they had at it and the kitchen sink. 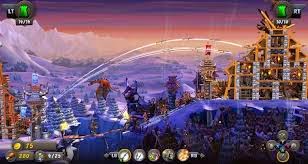 BUT it works. Very, very well. Yes its crazy, and I definitely wouldn't recommend you play it whilst high on strong pain medication. I tried it and it wasn't a nice experience which is why this review has been a long time coming. To not suck at this game you have to have your wits about you, for sure. The controls can be a little hard to get your fingers around, but eventually you will get there (if you;re not under the influence). But no matter how much you struggle to complete a level it is impossible to not have fun with this game.

Now a few of you may know I am quite a fan of most of the elements of this game. I love RPG's and I love tower defines games. My favourite tower defines was Defense Grid on the Xbox 360, a game many moaned about when it was a Game with Gold (WHY?). I tend to measure, unfairly, any tower defense game I play against that one. In my opinion the sequel to that game did not measure up to the brutality of the first but thats a story for another time... Castlestorm faired well in my opinion against the hard slog that was Defense Grid 1, and actually was a fair bit more fun, although INFINITELY more stressful, it was in a good way.


If we're going to take this game down to basics then it goes something like this. You are presented with a cartoon-style world that has a castle at either end of the screen. One of them is yours, protect it at all costs. The other is the enemies, DESTROY IT! You have to do this whilst dealing with a barrage of enemies, wolves, knights and hammer throwing dwarves etc. etc. To do this you can use your ballista, which can also include exploding apples and flatulent sheep. OR you can use some troops that cost food, which you store in your castle. OR you can magically teleport your hero into the fray and have at 'em. See, complicated right? All of these abilities are mapped to the same buttons, but you toggle through them using your d-pad, which is where confusion may set in. It definitely did for me, leading to some not very lady-like rage screaming at my TV.

I think that the game has quite a steep learning curve, but that may just be me struggling with the agility needed to swap between the abilities. By the way all of these abilities can be levelled up using your coins in-between levels. Castlestorm: Definitive Edition is exactly what it says...there can't possibly be a more definitive edition of this game. It is fantastic fun and very challenging and that is why I love it. It is refreshing to find a pick up and play arcade game that offers a greater challenge than many AAA full disc releases, and this it does by the bucketload. There is plenty to see and do in the world of Castlestorm and I highly recommend that you pick this game up!