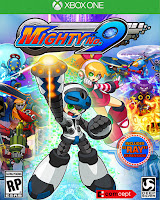 I have to admit this game was never on my radar. Well until that Kickstarter and all of the issues it ran into. I couldn't scroll down my Twitter page for ages without seeing someone raging about the delays this game had faced and problems receiving their codes.

Now I have never actually played a Mega Man game and apparently this is a "spiritual successor" from the same guy. I don't know, I mean the character you play as - Beck - looks enough like Mega Man to me that it could have been Mega Man 10 or whatever number they're on. Don't hate me for not knowing this, I can't even give you a good reason as to why I haven't played a Mega Man game, I guess I've just never gotten around to it. I'm sorry :(

Anyway let's get to talking about the actual game, eh?

From the off this game felt like it was trying to capture the old magic. Everything feels like it is supposed to make you feel nostalgic, but unfortunately it just didn't work for me. The music is good, but the menus felt cheap and the fact it screams "Mighty Number 9" every time you press a button on the menu quickly caused me a headache. It's infuriating. Which is strange cos I could listen to the little "Segaaa" voice all day. I still have to do it every time I play on the Mega Drive with my son.

Mighty No. 9 isn't very welcoming to newcomers in my opinion. There's no real back story, instead you are told that all of the robots in the world have been infected with a virus and you and the other Mighty's are the only ones that can save them because for some reasons you haven't been infected. The story isn't going to win anything, but does it really need to?! It's a platformer first and foremost and sometimes story sections just get in the way of a game don't they?

So obviously there are the usual buttons for a platformer, but I found that some of the tutorial tips were given too late to be of any use in that life and there were a couple of times I died before I could read the tip that had popped up on the side of the screen. This mostly happened when I had unlocked a new skill and hadn't yet been told how to use that skill.

I think the graphics in this game are a bit lacking. The backgrounds are drab and there are massive portions of the game that just feel empty and if you die a lot (you will) you end up running through these barren screens far too often. The enemies are pretty cutesy, they remind me a lot of the character design in the 3D Sonic games to be honest. The ones you meet throughout the levels offer very little in the way of challenge for the most part, although you will still find yourself having to retread the same areas when they're placed in particularly awkward positions. The bosses are where the real challenge - and anger - lie. Be prepared to hear there annoying one liners a fair few times.

I don't know, maybe it is that I'm just really, really shit at this game, but I found it to be incredibly difficult. A game being difficult isn't necessarily a bad thing as long as they are fun, but unfortunately Mighty No. 9 falls down in that regard too. Mighty No. 9 is just a long hard slog through a lot of lacking backgrounds. Skip this one guys.

Email ThisBlogThis!Share to TwitterShare to FacebookShare to Pinterest
Labels: Platformer, Review, Xbox One