Well I have well and truly effed things up for the Forrester's....

As I mentioned in my review of Episode 5 of the Telltale Game of Thrones series I felt like they were tying up as much as they could ready for an epic finale. Well I was right.

My heart was pounding from beginning to end during this episode as I watched things go from bad to worse for the Forrester's because of the decisions I had made in the previous episodes. As ever this review will be spoiler free, which I'm sure you are aware is a very difficult task when speaking of Telltale games so as such it will be a fairly short one.

Every arcing story from the previous episodes comes to a head in this final episode. A bloody mess of a head, for me at least. It is nothing short of thrilling from beginning to end, that has left me INCREDIBLY excited for the now confirmed Season 2.

The ending did feel abrupt, but I think that may be because of the dire state I had lead the poor Forrester's into. Decisions I had made previously came back full force to bite me in the ass and I was constantly kicking myself for being such a bitch/walkover/idiot in the previous episodes. Usually game finales have a final swan song for the games hero, but mine (at least) just kinda limped to a very sad and sorry end. And you know what? That made it all the greater.

Telltale does as G.R.R.M does - that is give you a character, make you feel for them and want things for them and the cruelly snatches them away in the bloodiest of ways. Would we want anything else? This game has been as true to the series it comes from as I ever could have hoped for and I can't wait for more. But first I'm gonna replay it all as closely together as I can and come back with a spoilerific review for all of those interested. Keep your eyes peeled!*

*That is once I can tear myself away from the wasteland that is The Commonwealth. Sorry folks.
Posted by Danielle at Saturday, November 21, 2015 1 comment: 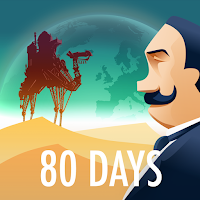 I've spent all day playing this game - well a good seven hours of my day - which considering I own Fallout 4 and Star Wars Battlefront is a pretty big deal. Something about it just kept me going.

80 days sees you become Philes Fogg's valet, Passepartout, as you try and circumnavigate the globe in 80 days. You must find routes from place to place, look after Fogg's health and make the money necessary for your travels as you try and win the Fogg's bet.

I have yet to do it in the required 80 days. On my 1st attempt I did it in 95 days which I didn't think was too bad for a first run. On my second play through I had gotten to Yokohama in 25 days, but then had to wait for ages for a bank loan and then the bank to re-open after the weekend. Gutted. I managed that in 93 days.

I think what is just so addictive about this game is the need to do it in 80 days. I feel compelled to do it now, and can't imagine I will leave this game alone until I have done. The writing in the game is brilliant, I honestly didn't expect to find it as entertaining as I did. The story is great and takes loads of different paths. At times it reminded me of the 'create your own adventure' books I had as a child - no bad thing - and I half expected to be told I was stabbed in the street the moment I turned my back if I picked the wrong dialogue option.

The game tracks all of your attempts too and shows the routes you have taken on a globe in the menu. When you do go in for another try (which you will!) you are shown your previous routes. At first this confused me and I didn't realise I hadn't opened that route in this game yet, leading to a few wasted days. But once you realise what is happening it's a great way to maximise the amount of cities you've visited.

In my opinion 80 Days is really pretty cheap for the amount of fun you can have it with it. If you're hankering for a challenge then grab it now. But everyone should at least put this in their Steam Wishlist and wait for a sale. You won't regret it. 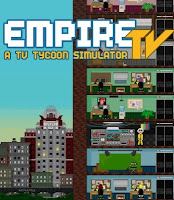 I love tycoon style games. Tycoons and simulators are pretty much my most played games on a PC. I've bought Theme Hospital about 7 different times in my life because I love that game so much. Tycoon games are great for a lazy Sunday morning in bed, until you've realised you've spent the entire day on it. Empire TV Tycoon had big holes to fill.

So in Empire TV Tycoon you run a TV channel where you compete with two other TV channels that run from the same building as you. You are not building this studio from the ground up like you'd expect from a simulator game and are instead taking control of one that already has a building, a small amount of viewers and some films to show. You have to increase on everything basically - more viewers, get more films in your library etc. etc.

Now what it does, it does pretty well and I've whiled away a fair few hours on it now trying to get my station to the top. I haven't managed it yet as I have gone too far into the red after a week or so because I kept trying to make full feature films. Yes you can also employ a script writer and make films in house, but this can be an incredibly costly way to increase your film library. I didn't learn, even after the first three attempts and kept trying to make all of the David Attenborough documentaries and feature length Star Wars films. Wow my bank balance went really red.

But Empire TV Tycoon is let down by its simplicity and I don't mean how easy it is to complete, seeing as I haven't yet. But I'd have really loved to have had to start from the ground up; try and broker deals with advertisement agencies, be able to run billboard campaigns for upcoming shows weeks in advance and be able to see a more in-depth analysis of just who was watching at certain times. You can see a general description of who was watching at certain times - smh as elders or kids - but oddly there are no children's shows that you can show, you just have to pick something that doesn't sound too bad and hope for the best. I also found that the children category were watching TV waaayyyy too late into the night, in my opinion you should be able to program a children's hour or some such and then go onto all the more gory stuff without the fear of a rogue child popping up in the audience.

I can't say I've not had fun with Empire TV Tycoon though, because I really have. I just wish there was more to it. But for a tenner or less this is well worth a punt if you're anything like me and love a good tycoon game. Try it out guys.

Kaiju Panic is available now on the Xbox One and is priced at £11.99.

Kaiju Panic is an insanely bright and cutesy tower-defense x RTS, seriously you made need to don your sunglasses if you're the type of gamer the Daily Fail writes about. The way the villages are set out kinda reminded me of an old Pokemon game - just not as pixelated.

Anyway you've been tasked with evacuating the village whilst defending against the invading kaiju. You need to harvest the purple stuff so that you can spend it on defence and artillery. Collect the villagers and they'll follow you around like Pikmin and speed up any of your constructions. Simple.

Except I didn't think it was, as the learning curve is just too steep - that or I'm just a bit shit, which is a very real possibility. I like to think I'm a fan of a good old tower defense and to be fair I rock at Defense Grid, but I found this game a little too fast and frenetic. In contrast to the corridors of Defense Grid, Kaiju come from all over the map and take unpredictable paths to the village, making it difficult to place turrets for maximum efficiency. This left me hurriedly attempting to put down some artillery in the way of the invading Kaiju, but often I wasn't fast enough.

The game is very well presented. My son was incredibly excited to play it after watching me but unfortunately found it too difficult. I think the art style does really pull in the younger audience, but be wary of buying this solely for your child as the chances are they'll find it too hard and turn off. If you're after a cute but tough tower defense game then you could do much worse than picking up Kaiju Panic!

Whispering Willows is available now on the Xbox One and is priced at £7.99.

In it you play as a young girl called Elena who has the power to leave her body thanks to a necklace she is wearing, you use this power to navigate the spooky old mansion to find her missing father. The necklace will glow blue when there is a benevolent spirit nearby and red for the nastier, more menacing ghosties.

The story is expanded upon by gathering notes and speaking to every blue spirit you come across. Some of these blue guys will want you to go and do something for you, and you do spend the majority of your time in game having to find an item in order to progress. In a game with more going on this wouldn't be a problem, but in Whispering Willows it gets pretty tedious REALLY fast.

The game sounded pretty cool, despite the cover art looking like a cheap old XBLIG title. The game is actually really nice looking though, much better than I expected judging it solely on it's cover. The sound in game is impressive too, setting a spooky atmosphere quite well.

I can't honestly say that I enjoyed my time with Whispering Willows, I was just kinda going through the motions and with such great games out there and Fallout 4 just around the corner (squuueueeee!) who has the time for a game like that?! Wait for a sale guys.