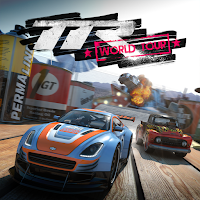 Table Top Racing: World Tour is available now for the Xbox One and is priced at £11.99.

Let me get this out of the way straight away, as of yet this game has NO LOCAL MULTIPLAYER. There are mumblings online of it possibly being patched in, but as of yet it hasn't. In my opinion this is a massive oversight. This game would have been played regularly in our house if it had a split screen option and instead it is barely ever opened.

My children came in from school the day I got sent this to review excited to try it out together. Instead they had to take it i turns to go through the campaign races, which is fine I guess but it really does affect the longevity of a game. After the campaign is done what would make you come back?

For me the answer (with this particular game) is nothing. Yeah the game is fun enough, but I don't want to grind the same races over and over again. There is an Online Multiplayer option, but I don't tend to play online as such anymore and let's be honest an online community eventually dies off.

It's a shame because this game really could have been excellent for families and groups of friends, the Xbox's answer to Mario Kart. But I really can't look past the fact that there isn't an option to grab a couple of controllers and play it with my children. The cars can be upgraded and there are a number of stars to earn on each level which can drag the game out to be a bit longer. There are a limited number of tracks that you revisit for different events over and over. It just feels lacklustre.
Posted by Danielle at Thursday, May 04, 2017 2 comments: