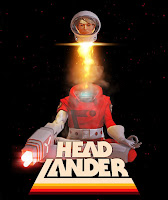 This game is weird. Really, really weird even by Double Fine's standards. You may have seen some of my screenshots on Twitter, they don't even go halfway to explaining how weird this game is.

In Headlander you play as a disembodied head. Yup, really. You're a head in a propelled helmet with sucky power that means you can suck the heads off other robots and steal their bodies. I can't even think of a better way to explain this.

You have been awoken by a group hoping to overthrow the AI overlord Methuselah. You being just a head will come in very handy on your journey through the ship "Starcophagus" (again, really) as there will be many doors that are blocked off to you that have a handy head sized vent just above them. Of course heads aren't really known for their weaponry so you'll need to headland on to other robots to better arm yourself against the bad guys. You can dock on to any of the robots you encounter, but most of them are useless in any real sense. Certain robots can get you through doors and if all else fails get on a robot with a laser and shoot the door into submission.

I know that this review isn't making much sense, even as I type it, but honestly the game doesn't make much sense either. It is insane. At first it feels like a lot of fun. It's very tongue in cheek and for awhile it is a lot of fun to just pull the heads off unsuspecting robots. Unfortunately though, it soon gets stale. Combat can be very tricky and it's annoying to try and find another laser shooting bot when the one you were occupying gets blown up. Eventually you'll realise that the best way to navigate combat is with just your head, dodging the lasers and sucking the heads off the robots trying to kill you is often much easer and faster than trying to shoot them. Obviously, sometimes this won't work and these are the times that will have you screaming at the TV. The boss fights are even worse, and if you die you better be ready to repeat the whole effing thing.

I expected more in depth puzzles from Headlander in all honesty. The puzzles are simplistic and don't make the best use of the whole you being just a head in my opinion. I'd have liked to have seen more emphasis on disguise based puzzles, rather than just navigating various rooms and enemies. It's a very shallow experience, something I haven't said of a Double Fine game before.

All in all Headlander is fairly fun for the first hour or so. But then the fun trickles away and you're just kinda going through the motions. I'd wait for a sale, guys.

4/10 TRY IT!
A code was provided for the purpose of this review.
Posted by Danielle at Wednesday, September 07, 2016