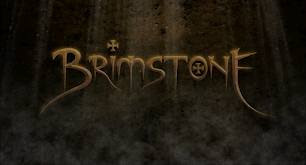 I've heard a lot of good things about Brimstone so when the developer replied with a review code I was pretty excited to sit down and play this game.
Unfortunately Brimstone has left a slightly bitter taste in my mouth. Now Indie Games, for me have to earn a few stars for the pure fact that even if you only have a little fun it's only cost you 80MSP. And with a lot of Indie Games I often find myself thinking that I would have paid more for the experience. Brimstone is not one of those games. 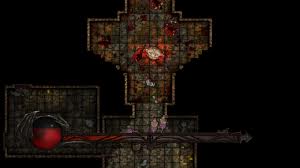 Now it isn't that I dislike RPG's, in fact I LOVE them. What I dislike is a game masquerading as a story-led RPG that turns out to be a dungeon-crawler with very little customisation available.
When you open the game you are treated to a beautifully drawn screen to look at whilst you listen to an incredibly dull voice explain the pretty dull story. Then you're thrown into the first dungeon. There is a man at the desk that will explain a few bits to you and a man whom you can buy items from.
Now to anyone who buys this game I suggest you test your buttons out in this room. This room will NOT allow you to use the attack button (x) but get used to the menu buttons etc. DON'T press 'y' as it will use one of your Scrolls of Health (you're welcome) but yeah use this danger-free room to become accustomed to the buttons as this game has no tutorial. This would not normally irk me quite so much, but in a game such as this I do think a tutorial is pretty much needed. You have to be a seasoned RPG'er to work out a lot of the stats and nothing is explained. Literally nothing. You have an inventory full of items that state 140+ P Res 10+ Eva and 1+ Dex for example. Pretty self-explanatory to someone who is familiar with an RPG, but to anyone who has picked it up because of it's value for money aspect may be left a little baffled. 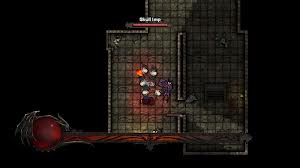 There are only four main stats to level up, Strength, Toughness, Dexterity, Magic. Each time you level up you get five points to use as you see fit. For some of the more uncommon items find you will need to have a certain stat levelled up.
I didn't find this game boring, but I can't say it was particularly enjoyable either. It was just there. I just played and played without really feeling anything. It felt like I was constantly bashing the x button and every so often the y button to recover some health. I didn't feel a driving need to push forward to see what happened next and I didn't really care whether I levelled up or not. As I said this game feels more of a button-bashing dungeon crawler than an RPG.
For 80MSP I'd say try it. If you like dungeon crawlers, if you don't mind mindlessly bashing buttons for what feels like hours on end. And if you think a game can be called an RPG because it includes four things to level up, go for it.

4/10 Try It!
A code was provided for the purpose of this review.