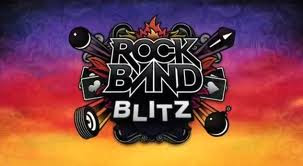 I have to admit I was VERY excited for the release of this game. I have long since been a fan of the music game genre, spending a LOT of time and money kidding myself I could actually play the real versions of the instruments as well as I could play the plastic ones. I was interested to find out how well a peripheral led game would transfer to controller-based gameplay. I needn't have worried though, Rock Band Blitz is insanely fun!
I already had a copious amount of DLC for my other Rock Band titles and was wondering whether any of them would jump over to this game without extra downloading needed. Again I shouldn't have wasted time worrying as when I downloaded the game and waited for the Song Pack to download, my  DLC songs were all there patiently waiting for me to play. 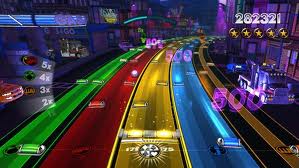 I wasn't brave enough to go right ahead, but the smart guys at Harmonix have included the tutorial with the first download, rather than the track pack, so you can go ahead and learn what you're doing whilst the good stuff downloads.
I played along with the tutorial, and I have to admit I didn't quite get it. I struggled to understand the buttons and it just didn't make sense to me. But when I set down to play my first real track, it was like an epiphany....this game ROCKS!
Starting off on the drum track I expected it to feel a lot easier than drums on the other games. How wrong I was. I don't know how the guys at Harmonix have done it but they've cracked the balance between fun and challenging. They've managed to make you feel like you're playing the drums with just two buttons. I got my multiplier on the drum track and moved over to the bass, doing the same here. Again the rhythm was obvious. I moved over to the guitar track to shred out the solo, fully expecting it to be easy, what with there only being two buttons. How wrong I was. My first ever solo on Rock Band Blitz saw me get an abysmal 60% of the notes. Shocking.
In the tutorial I hadn't quite grasped how important it was to get that multiplier up but in game it isn't just important, it's FUN to switch between the tracks. Whichever track you're playing the audio rises higher than the rest so you can hear what you're doing. It leads to some pretty funny moments if you do it at the right time on the vocals track. 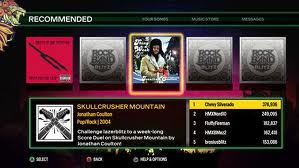 When the song pack had downloaded I went back out to look at the menu. The 25 songs included with this title, I feel, are a well rounded stock of songs. There is something for everyone there, and some guilty pleasures for even the rockiest of people.
Now we all know that Rock Band have a LOT of DLC songs. If you ever check the dash for new add-ons you are inundated with track after track of Rock Band goodies. This title places recommendations into your game menu, based on songs that you have downloaded previously. I thought this was a great addition, I am a glutton for extra music tracks. I ended up spending some more MS Points on more songs and can safely say there are well more than a hundred on my game.
I have to admit I thought the novelty might wear off, but as of yet it hasn't. I can honestly say it is one of the most fun games I have played in a long time. The fact it is a Pick up and Play title makes it even better, and even though I thought I would I haven't found myself missing the peripherals.
This game is pure, undiluted fun. For anyone. My son had a go (he was rubbish but is only 3!) my brother had a go and loved it, even though he hates rock music and has never played a music game in his life, and my guitar playing partner had a go. He expected to hate it, being a lover of Pro Guitar on hard difficulty, but even he admits there is something about this game that just makes you love it.
This game is a worthy addition to anyones game list. I honestly after just a few days, can't imagine not having it on my Xbox. I've recommended it to everyone I know, so the same goes here guys. Go buy it, I promise you won't be disappointed.

10/10 BUY IT!
A code was provided for the purpose of this review.

Posted by Danielle at Saturday, September 01, 2012