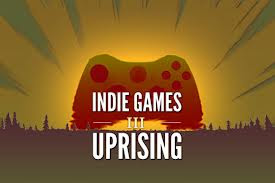 The Indie Uprising continued today with the release of Sententia, Michael Hicks' latest contribution to the indie game market, and what a contribution it is! 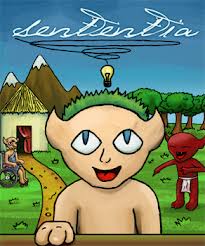 'You are a special creature, and you have a purpose; but are you capable of holding on to it? Sententia is an “art game” that explores the challenges we face to keep our imagination alive as we grow. Start your journey through life’s forest as a young creature and build your way through it by solving puzzles, interacting with your fellow creatures, and defending your ideas with your own sententia.'
In Sententia you play as a creature. A cute little green haired creature, depicted as a small child at the beginning of the game. I honestly though the opening to this game was amazing. The conversation between the grandfather, the daddy and your creature was so cute. The grandfather tells the creature what everyone wants to hear...that whatever you want to do, if you put your mind to it you can do it. The daddy comes along and does the typical parent thing, worrying too much about a 'real' job. I think that this is something everyone can relate to, everyone has had a dream that has been laughed at or they have been made to feel ridiculous for. This game is sort of a two-finger salute to everyone that has said 'you can't'. 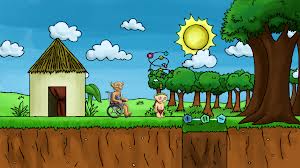 The art style in this game is brilliant. Upon opening the game the menu screen took me by surprise. We've all played games that have been totally lacking in any originality, but this game is definitely NOT one of those. The writing used for the menu options is beautiful, and in a market inundated with sparse, operation-only menus this was a pleasant surprise. A little highlighter stroke comes over the highlighted option, a really neat little feature.
The music, throughout this game is really well made. It sets the mood for the game perfectly and is easily one of my favourite game soundtracks. It's peaceful and haunting at the same time and it is clear to see that this talented developer has other talents too! 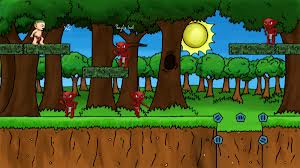 The game does have a few little niggles. But not enough to not enjoy the game. There were a few points where I was really struggling to reach blocks to jump onto, and when I did reach them my character just kind of flew on by. These weren't the disappearing blocks that appeared later on but were fairly early on in the game. I persevered, even though at one point I didn't think my 'a' button was going to survive the game.
Some of the game feels difficult for difficulties sake. But looking back at the opening paragraph to the game, I understand why. Whilst it may be frustrating in game, this game is pretty much a 'coming of age' game so naturally it's going to involve some challenges. Like everything in life, stick with it and you will get through. I think this is a really nice sentiment for a game to carry.
The bridge building puzzles are where this game really shines. Well made, well thought out, well executed, these little puzzles feature in a fair few of the maps and are really fun to work out. You have to link the bridge together, and the pieces can only be linked to others a certain amount of times. Honestly if Sententia had a mini-game just for this I'd be set for a good while.
Overall this game is WELL worth the 80MSP. I actually would have entered this in at the higher price point for XBLIG titles of 240MSP. For 80MSP you are getting a cute, lovable but challenging game that can really speak to anyone. It is beautifully made, and I forbid anyone to listen to the music and not have it stuck in their head. There are a few very tiny kinks that, to be honest, I really had to dig deep to find. This game makes a worthy addition to anyones XBLIG library.