Blues and Bullets Episode 1 is available now on the Xbox One and is priced at £3.99.

Episodic games are all over the Xbox Marketplace at the minute. I'm a big fan of them myself, I'm pretty busy so to be able to 'finish' a game in under 5 hours suits me well. Then we get the next instalment about a month or so later, which is something I always look forward to, particularly with Life is Strange, King's Quest and Telltale's Game of Thrones. Well Blues and Bullets is another one to add to that list after playing the first episode.

In Blues and Bullets you begin playing as a little girl who is trapped in a cell. The story soon moves to you playing as Eliot Ness, famous for taking down Al Capone, who now runs a diner after retiring from the force 20 years ago. As always on this blog I won't go into proper story detail, but it centres around Capone and his missing daughter. 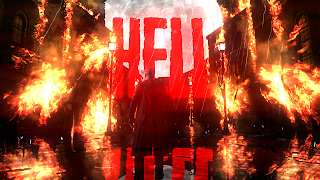 The games graphics aren't the best ever, but the art style is truly beautiful and gives ample opportunity to capture some nice screenshots for you dashboard background. The game is exclusively in black and white, with red being the only colour that is picked out which more than makes up for the lacking graphics.

This game is NOT for the faint-hearted as it features a pretty grisly murder and I've a feeling this is setting a precedent for the upcoming episodes. The game looks more open than it is, it gives you fairly large environments but they are full of hidden walls that basically lead you to exactly where you need to be so there isn't really any space to explore.

I'm very excited for what's coming next in Blues and Bullets, episode one is left on quite a big cliffhanger and I can't wait to see what happens next. At £3.99 an episode, which I'm guessing will be once every 1-2 months it's an absolute steal and one that won't break the bank. Go grab this episode and see if its for you.