Nova-111 is a turn-based, puzzle/adventure game with real time strategy elements thrown in. Yeah, all those rolled into one big package. Yikes. But is it any good?

You play as a ship who has to navigate these caves looking for scientists, treasure and upgrades. When you start out you can basically only butt heads with the enemies, luckily for you that's pretty much all the first set of enemies can do too. Later on though the enemies start to get a little more difficult. You soon encounter little aliens that connect some kind of tube to you an suck the life right outta ya. There are little bomb dudes, charging dudes, guys with armour and many, many more to be found. Thankfully you are given a few upgrades to help you out with these tougher aliens. You get a myriad of tools to help you make it through the game, including a laser. Because no game in space is ever complete without one. 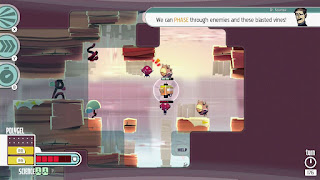 Graphically the game is great; a cutesy cartoon style that works really well. You have a little fog of war so you can only see a certain amount of squares around you, and you can't see past rocks until you've broken them.

I did have an issue in the tutorial where I had to restart it. This happened a few times, when I was told to move back to dodge I was in a position where I couldn't move backwards, only up. The game would not let me do anything so I had to quit out and start the level again. Very annoying.

Overall the game works well although it's a game that, in all honesty, isn't for me. As much as I enjoyed my time with it, I found it pretty frustrating. I think it's the mix of everything that kinda ruins it for me, had it been either turn-based or real time I'd have probably liked it a whole lot more. As it is, it is a middle of the road game that tries to spin too many plates at once.

It is a good game for loading up to kill ten minutes though. Although saying that I did that and didn't finish the set of three caves in one sitting. When I went back it started me right back at the beginning of the cave system, which was pretty annoying.

If you fancy a bit of a challenge then Nova-111 could well be the game for you, I found it pretty damn challenging. But if you're in no great rush I'd definitely recommend waiting for a sale.

5/10 TRY IT!
A code was provided for the purpose of this review.

This review was first featured on www.completexbox.com
Posted by Danielle at Tuesday, September 01, 2015

Email ThisBlogThis!Share to TwitterShare to FacebookShare to Pinterest
Labels: Nova-111, Review, Xbox One