Quest of Dungeons (Xbox One) - Review

Quest of Dungeons is available now on the Xbox One and is priced at £7.19.

There are a fair few roguelike dungeon crawlers now on the Xbox One, most of them are pretty good too. So does Quest of Dungeons measure up?

Quest of Dungeons is a solid addition to the indie market. Procedurally-generated pixelated goodness abounds and never actually feels 'grindy', which is still fairly unusual in this genre. You can pick a character from four different classes (five if you have completed it) and head on into the dungeons to complete quests and more importantly GET MORE STUFF!

I'm very OCD when it comes to games. It takes me ages to complete games because I like to explore every nook and cranny, well as long as the game is good! In fact I have still not completed my play through of Fallout: New Vegas as my OCD gets so bad that I can't continue quests in case going further in the story locks me out of one side quest. It's tough being me. Anyway Quest of Dungeons is just one of those games, I am yet to leave a floor before I have gone through every room with a fine tooth comb, I just can't do it! 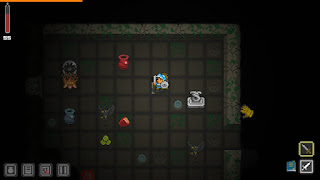 Usually I advise you guys that games like this are good for the odd ten minute session, load up have a quick go and get out. But that is not true for this game, in fact I spent three hours on it today in one gloriously uninterrupted session whilst my daughter napped. The same can't be said for many of the roguelikes I have reviewed previously. This may be because this one feels a little more strategic than most, after a few goes you start to predict where the enemy will move to so you can get the first hit in, or even better get them to step on a trap.

I found trying to play with the analogue stick a little fiddly, but that was easily rectified by using the D-Pad. I had to turn on auto pick-ups, because it was just too damn annoying to keep pressing to pick everything up. At first my screen was way off, but I did find the screen size adjuster eventually and then 2x zoomed the game and now I'm in pixel heaven. It's beautiful. The music in the game is brilliant too and I actually found myself absent-mindedly humming it earlier as I went to pick my son up from school.

Of the reviews I've written up today this one is the cheapest, but you know what, it's the most fun too! It's the one with the best replayability by far and is priced fairly, which is something I rarely say these days. Go get it!