King's Quest: A Knight to Remember (Xbox One) - Review

King's Quest: A Knight to Remember is available now on the Xbox One and is priced at £7.99. Alternatively you can buy the Season Pass for £31.99, which gets you all future episodes and a bonus Prologue and Epilogue.

King's Quest was apparently a very popular game in the 80's, but I'd never played it or indeed heard of it before the reboot was announced. I'm gonna excuse myself by saying I wasn't born until quite awhile after release.

Anyhow King's Quest s the story of King Graham, as told by him to his granddaughter Gwendolyn. Voiced by the amazing Christopher Lee King Graham is telling Gwendolyn stories from his past and it is these stories that you will play out in the chapters to come.

This first chapter sees you play through the Knight'e Tournament in Daventry. I will not go into anymore story than that. This truly is a game that you will enjoy infinitely more if you experience it for yourself. Suffice it to say that the writing in this game really is top-notch. It's witty, clever and brilliantly acted. The game is both beautiful to look at and to play. Controls are responsive and the quests are great. There are plenty of times where you can meet a sticky end, these moments are fantastic, as we see old King Graham and Gwendolyn make some funny remarks about what you've just done. 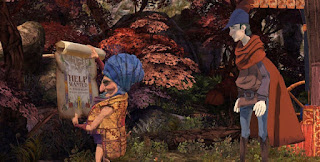 Usually for games like this there is just one solution to each of the puzzles you are faced with, but in King's Quest there are multiple ways in which to solve each problem. It is hard to say what effect this will have on the story as it continues, but it makes for an interesting change. The characters you meet along the way are all really, well, characterful. They're hilarious and so memorable.

King's Quest is a game I thought I would love anyway, I love this type of game and I am surprised that I hadn't heard of this one. It is hard to think of someone that wouldn't like this game though, it is honestly so well done. Whilst the Season Pass does sound pricey at £31.99 I'd be tempted to recommend it, as for that you get all five episodes and two bonus ones. For those who may be comparing this to Telltale's price points, which are usually around half the price, King's Quest is easily double the game, with this episode probably taking somewhere between 7-8 hours to complete.  If you're on the fence at all I would recommend that you pick Chapter One up and try it out, but honestly I don't know who wouldn't want to continue hearing from King Graham.

Email ThisBlogThis!Share to TwitterShare to FacebookShare to Pinterest
Labels: A Knight to Remember, King's Quest, Review, Xbox One