Nightmares from the Deep: The Cursed Heart (Xbox One) - Review

Nightmares from the Deep: The Cursed Heart is available now on the Xbox One and is priced at £7.99.

Nightmares from the Deep: The Cursed Heart is a hidden object game, a game type I'm not entirely convinced has a home on the home console. Nevertheless it's there, so here I am to tell you whether or not it's worth your money.

If you've never understood why people play hidden object games then, just skip past the rest of this review and don't bother with the game. It plays exactly like every other hidden object game ever. If, however, you have a penchant for finding mundane items in a pile of mess then read on!

Now I have to confess to having wiled away a little too much time on hidden object games in my iPad. But I mostly only play these when the tots have taken over the TV and I want a mindless five minutes. They usually have some cheesy story rammed in between the various screens depicting different piles of mess for you to zoom in on. Nightmares from the Deep is no different. You play as a museum curator who has taken delivery of a pirate to display in your museum. You unbox him, place his weapons where they should be, and lo and behold he awakens and robs your daughter. The rest of the game is you following him around to save her. 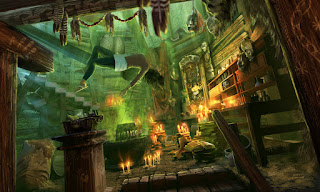 I won't go into more detail than that, partly because I never like disclosing to much story in my reviews but mostly because the story was so dull I stopped listening. But I for one never play a hidden object game for the narrative, so how does it play?

Obviously hidden object games rely on you pinpointing the position of sometimes tiny items in a pile of mess, so they should be accurate. Unfortunately there were a number of occasions where I was clicking on an item from the list but I hadn't 'found it'. This is ok when you're playing on 'Normal' but when you play 'Expert' there are penalties for missing. You can skip the hidden object parts though and play a game of Mahjong instead. I like Mahjong, but I like to use the D-Pad to play something which you cannot do in Nightmares from the Deep, which leads to you skipping over some tiles accidentally.

Overall I'd say that there is a reason that hidden object games haven't really made the move over to consoles yet. They work on tablets, arguably, but on a home console they really don't. The graphics and animation really look dated, at least for this game. I don't really see who they are marketing this game at, maybe they're hoping to score a bit of the bored housewife market and take them away from Candy Crush Saga. I don't know, but I really don't see who else would be picking this up.

3/10 SKIP IT!
A code was provided for the purpose of this review.
Posted by Danielle at Monday, September 07, 2015