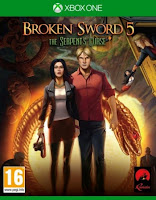 Broken Sword 5: A Serpent's Curse will be available on September the 4th on the Xbox One and will be priced at £19.99.

I've been a fan of Broken Sword games as far back as I can remember, when I used to sit and watch my Dad play the first game, The Shadow of the Templars on the old Playstation as a little kid. There was something about it that just captured my attention, and I remember begging my dad not to get rid of it when he'd finished with it because 'one day I want to play it'. I tried and tried on the Playstation to play through it, but only being young I lacked the know how. Years later I got it on the PC and locked myself away until I'd completed it. Since then I've completed each game multiple times and honestly, haven't bored of them yet. I actually bought the first game in iPad too, just because.

Broken Sword 5: A Serpent's Curse was released on Vita about a year ago in two parts. I bought the season pass straight away and threw myself into another adventure with George and Nico. As sad as this sounds, it felt like meeting up with old friends again, the characters are just how I remembered from my last foray into the Broken Sword world. Hell Nico still hasn't changed her outfit!

When I heard about the upcoming release on Xbox One I was super excited to play it again, man, I'm still hoping they'll somehow bring all of the old games to the console! 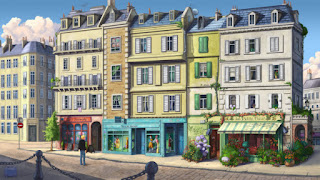 It doesn't disappoint. For ANYONE who has been a fan of the Broken Sword series, for no matter how long this game is a must buy. It goes back to the Broken Sword days of the original two rather than the fancy 3D graphics of the latter two. And it is all the more brilliant for it! As much as I enjoyed all of the games that Revolution have given me, my heart really does lie with the original two, they are by far the best in my opinion. With 5 they have brought back the 2D backgrounds, but have mapped the characters in 3D, giving it a slightly strange look, but one that totally works.

If you haven't already played the Broken Sword games WHERE HAVE YOU BEEN? Go and get one of the older ones on iPad or something and play it. Then come back and play this one. For anyone who hated the 3D games don't be put off buying this one, as it honestly recaptures the greatness of the original two.

I was worried about playing it on a console after really only playing these games on PC's for the most part, but the mapping to the Xbox controller is brilliant and works seamlessly. There were a few moments where I had lined up to click something to examine as George made his way there and missed because he was moving, but that was my fault. I was too impatient to move on and didn't want to wait for George, or Nico to get there. Unfortunately they haven't mastered the art of teleportation just yet.

I'm not gonna ruin story for you, but suffice it to say that it is too the usual standard for a Broken Sword game. There are plenty of characters to talk to as you get to the bottom of what's happened and plenty of good old fashioned puzzles to solve. I really hope that this game is the first of many MANY more to come.