Yu-Gi-Oh: Legacy of the Duelist (Xbox One) - Review

Yu-Gi-Oh: Legacy of the Duelist is available now on the Xbox One and is priced at £15.99.

I've never played a Yu-Gi-Oh game before, so I'm reviewing this as a complete noob. However, I'm lucky enough to share my house with a kid that loves the show and a man that loved the card game, so they helped me out a bit. Well, a lot.

When you first open up Yu-Gi-Oh: Legacy of the Duelist it's pretty daunting. There are FIVE different campaigns. Yep, that wasn't a typo, FIVE CAMPAIGNS. They follow each of the series, namely Yu-Gi-Oh!, GX, Yu-Gi-Oh! 5D's, Yu-Gi-Oh ZEXAL and the newest one Yu-Gi-Oh! ARC-V. That's a whole load of card gaming goodness for your money!

Just to further my confusion, you have the choice to build your own custom decks to play with, rather than using the ones provided. The ones provided are from the battles in the show, so my son was extremely excited! It is really cool to play through the game with the historic decks if you're a fan, but if not make your own, as you can make a much stronger one. Or so I'm told by my other half. I got lost in the sheer amount of cards when trying to make my deck, apparently this game features EVERY card made to date. Jeez. No wonder I felt lost. 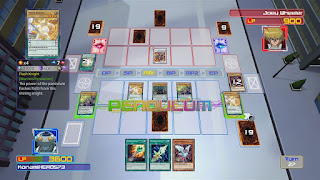 The tutorial is VERY wordy, something I imagine would grate if you weren't coming to this game having only played a little bit of Magic back on the 360. I did collect Pokemon cards as a kid, who in their 20's hasn't? But to be honest my brother and I probably made up our own rules so the tutorial for this game was much needed.

The graphics and the music are good, though I would have liked to have had voices for all of the dialogue. My son isn't an extremely confident reader yet so it meant a lot of reading aloud on my part for him to follow. I had a sore throat after some of the lengthier cutscenes!

At first I thought that there were no animations for the battles, something which really upset my son. But it is just the monster cards that trigger an animation, making them pretty epic. Unfortunately these are unstoppable if you're in a rush or whatever you are forced to watch the animation. This didn't bother me as I felt it's something the game desperately needs, but for anyone who just simply wants to play the card game I can imagine it would get annoying.


Overall I'd say you're gonna get more out of this game if you're a fan of the show, but it's great for total newcomers too. It'll just take you longer to understand what the hell is going on! The value for money here can't be ignored, this is a great card game and there's just SO much of it to keep you going. It's a game I can recommend for sure, as I've never been a huge card game player and I found myself really enjoying it. This is a no brainer for fans of card games or Yu-Gi-Oh, but for everyone else I'd still say it's worth a punt. Relaxed one-handed gaming at it's finest!