Submerged is available now on the Xbox One and is priced at £15.99

When I first loaded Submerged I fell a little bit on love with it. I finally though I'd found a game that I could play whilst relaxing and in front of my children to boot. I love adventure games and don't always feel like having to do much else other than walk around finding new stuff.

Lifeless Planet is a game that carried that off pretty well. It was a game that felt well thought-out and flowed quite nicely. So, naturally, Submerged was gonna be compared to it. At least a little.

Unfortunately for Submerged, and for me(!), it doesn't really hold up well when compared to Lifeless Planet. Your joy of being dumped in the middle of all these half-sunk buildings soon turns to despair when you realise that the game is basically fetch quest central. You will go and get packages to help your sick brother. You can pick up some secrets. Some boat upgrades, and if you hang around in your boat enough you can see some animals. 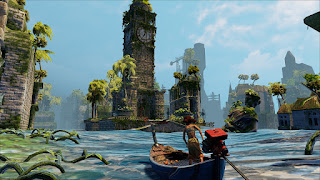 All of this would be well and good if the game was a little better looking. At first I was fairly impressed by the graphics, but the longer I played the more jagged edges I saw on the water, reminiscent of the last generation of console at least. Don't get me wrong some parts of the game can be stunning, the lighting in particular stands out and I did make use of the postcard feature on numerous sunsets. But unfortunately Submerged doesn't hold up too well in the stark light of day.

If you have a fair bit of patience (I don't) this is an easy 1000G, with just ten achievements scored at 100G each and these are basically for collecting everything in the game. The map isn't too big so this could be done in a couple of sessions.

Submerged feels like something that's been half-assed. It could have been fantastic, it could have been the Xbox One's 'Everybody's Gone to the Rapture', instead it feels like a game that someone started and never quite finished. It's a real shame. The price puts it completely out of reach of a recommendation, at £15.99 I expect a game to be pretty damn good, and have at least some sense of replayability. Trust me, once you've played Submerged once, you won't be going back for another go. Skip this one guys.