SlashDash is available now on the Xbox One and is priced at £7.99.

Maybe that's all the review I need to give really, but obviously I'll carry on. That is the biggest problem by far with this game, the lack of any kind of single player mode. I actually really like SlashDash, but I'm only able to play it when I can prize my son off Skylanders and/or my partner off of Batman. My daughter is still too young to play properly, but I send that she'll be the most difficult one ever to coerce. Trust me 'headstrong' is just not strong enough to describe her. 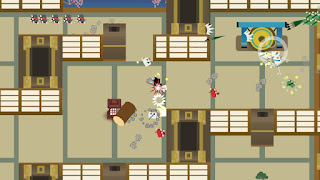 Anyway, I digress. In SlashDash you can play as a team or in a free-for-all. Unfortunately the four modes included don't allow you to change between these; only two of the modes allow for team play, these are Capture the Flag and Assassination and are by far the more interesting modes. And these are the modes I have spent the least time in due to not having 4 people willing to play SlashDash at the same time. Bummer.

So I played Death-Race and Mirror Match the most. These were, I suppose, interesting enough for some quick party play and whilst we were playing everyone did have fun. But it does soon feel a little tired and there are only nine maps to choose from so everyone got bored by it pretty sharpish. I suppose if we'd had a few friends round we could have got some kind of tourney going, but in all honesty my hearts just not in it.

Maybe it'll be a game I'm grateful for in a few months time, but reviewing this has felt like a chore so I won't be turning it back on anytime soon. The graphics are cutesy and the game does control well, but for me if a game has to be played multiplayer then it should include an online multiplayer too, if only to make the job of reviewing it that bit easier!

A code was provided for the purpose of this review.
Posted by Danielle at Saturday, August 08, 2015

Email ThisBlogThis!Share to TwitterShare to FacebookShare to Pinterest
Labels: Review, SlashDash, Xbox One