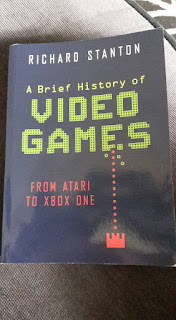 I'm about to write a little bit of history here on dkplaysgames.blogspot.com and that is my first EVER book review. There aren't that many books about video games, as far as I know at least. So I never thought my love of reading would be able to make an appearance on this blog. But thanks to Richard Stanton, I've been able to bring two of my great loves together to bring you this review.

A Brief History of Video Games is exactly what you'd expect from a book with that title, except, well it's not actually all that brief. 350 pages filled with gaming goodies spanning the humble beginnings right up to the here and now and the wonders of VR gaming. I see this book becoming a staple in the 'Recommended Reading' lists of Universities offering courses in anything to do with gaming. It is in no way a 'Complete' history, jeez there's a book you don't wanna lug around, but it has a heck of a lot going on inside and would serve as a great gateway reference book, especially in the first year of a degree.

But that's not to say that this books isn't accessible to just about anybody. Gaming's history is a fascinating subject, one that Stanton clearly knows inside out. But instead of writing it in a way that excludes anyone without at least a background knowledge in the subject, as many reference books tend to do, Stanton writes so that anyone can pick up and read. Seriously, my technophobe Mum even picked this book up and flicked through, stopping to read about the origins of 'Pong', a game she remembers fondly because of its sheer simplicity. Well that and a tale about her swapping her broken bike for Pong with a girl off her street, but I digress.

I finished my degree last year and I am currently finishing off my MA, so I've read my fair share of reference books. I'm all too used to the often stuffy way in which those books are written. Usually with books that include this sheer amount of knowledge, that scholarly writing style goes hand in hand. Not with A Brief History of Video Games. And maybe that's because the subject matter is more relaxed and relatable than English Literature, a field filled with toffs, but I'd be doing Stanton a huge disservice to put the approachability of this book on anything other than his writing style. If you follow him on Twitter (and if you don't you SHOULD @RichStanton) you already know this is a guy that knows his games. More than that though, he's a hugely approachable guy, often starting conversations or debates on Twitter and interacting with his followers.

This book is an extension of that, the whole thing is written in little palatable chunks, soundbites if you will. It feels like it has been written to spark discussion. Pick it up for five seconds and learn a new gaming fact every day for a couple of years if you so wish. He's chunked up gamings rich history into 27 clear and concise chapters which are then handily written in little bullet points, making it super easy for you to remember where you are up to. Whilst reading a chunk at a time is an option, you'll probably find it hard to stop, I know I did. And that's ok too. Yes the bullet points can sometimes feel like they don't run on from each other all that well but for the majority of the book they flow nicely from point to point.

All the text is featured on the top half of the page, with the bottom reserved for screenshots and pictures of consoles etc. I did wonder whether this layout could have been better, as some of the pages at the beginning especially don't have anything along the bottom, so it makes the pages look a little blank, but it works.

I learnt a LOT from this book, especially about the pre-1980's era. But even the chapters I would consider myself fairly knowledgable on brought me new information and things I hadn't considered before. In my opinion no gamer should be without this book, even if it is just so you can arm yourself against the next person who tells you to stop 'wasting your life on video games'. Gaming has come such a long way and it's great that Stanton has taken the time to remind us of the humble beginnings. Grab a copy and put it on your coffee table, the way people do with fancy art books. I guarantee that it'll spark some discussion and you never know, maybe you'll get you're mum reliving her Pong heyday too.