Brothers: A Tale of Two Sons (Xbox One) - Review 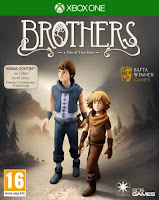 Brothers: A Tale of Two Sons is available now on the Xbox One and is priced at £14.99.

This is a game that was originally released on the 360 and, as with seemingly everything these days, re-released onto the Xbox One recently. If I remember correctly it was a Game with Gold on the 360 not too long ago, but is it worth picking up on the One too?

Well not at this price it's not. If you've already played it there's only extra art and commentary in the Xbox One version, not enough to warrant the price tag in my opinion.

However I never played the game on the 360. I seem to remember it being a Game with Gold, but this was after I had got my One which had completely taken over my gaming. The poor 360 never got a look in. So I got to play Brothers on the One as a newcomer. And I LOVED IT! 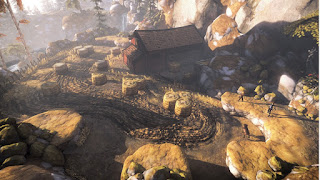 You control two brothers, each one has a side of the controller so Big Brother is right trigger and thumbtack and Little Brother is the left. This is MEGA confusing. I'd like to say that you soon get used to it, but I didn't and all the way through my time with the game I was sending the brother's in the opposite direction. The poor guys spent a lot of time walking into walls under my supervision. Oops.

But Brothers is a beautiful game and I don't mean just visually. The controls, whilst I'm not good at them, work really, really well and the relationship between the brothers is so heartwarming and the whole game just kinda sticks with you. It really is pretty near perfect in its simplicity.

As I said, if you have played it before I struggle to recommend you pick it up again, unless you're desperate to own it on another console. But if you haven't had the pleasure yet just go and get it. It really is something else.

A code was provided for the purpose of this review.