No Time To Explain (Xbox One) - Review

No Time To Explain is available now on the Xbox One and is priced at£11.99.

No Time To Explain started life as a flash game a few years back, and you can tell.

At the beginning of the game you are met by your future self who is then eaten by a giant crab. Grab his laser gun and make your way outside to start your adventure.

I'll be honest and say that at first I was completely flummoxed as to how to get past a wall that was too high to jump over and spent an embarrassingly long time just jumping over and over in a vain attempt to get over it. It took me ages to realise that twiddle of the right thumbstick activates your laser gun, which kindly acts as a jetpack of sorts. 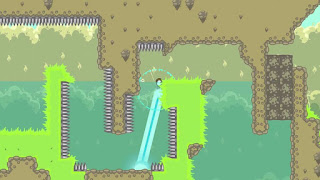 You will venture through a series of incredibly tough levels featuring plenty of spikes on your adventure. The laser-gun-cum-jetpack is unwieldy at best and it is incredibly hard to actually end up where you wanted to. You will die multiple times. And that's from pretty much the start of the game.

I found the later levels really tough to approach with anything close to patience and precision. By then I had realised that the games controls just don't allow you to be precise and it very much feels like pure dumb luck will be the only way you get to the end. No Time To Explain feels like a cheap version of Super Meat Boy, but without the charm.

The narrative is super dumb but pretty funny in parts. The game is just MENTAL. But unfortunately the reliance on the unreliable jetpack just makes this game too challenging to actually be fun. This would have faired way better priced at around £7.99, but when you consider the calibre of some of the other games at the £11.99 price point No Time To Explain really doesn't measure up.

Email ThisBlogThis!Share to TwitterShare to FacebookShare to Pinterest
Labels: No Time To Explain, Review, Super Meat Boy, Xbox One