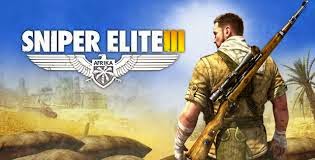 Sniper Elite III is available now for multiple formats. The price on the Xbox One Marketplace is around £40/$50.

Sniper Elite v2 was my gift to my Dad for Father's Day the year it came out. He has always loved playing games, but has found himself becoming irritated with the fast paced, run and gun mentality of  the newer releases (CoD I'm looking at you!). He likes to be methodical and wants to be able to take his time and take the shot he wants to, rather than the shot the game makes you unless you wanna die.  He LOVED Sniper Elite v2 so much that my partner and I bought it for us too. He has played it, but I am ashamed to say that I STILL have not gotten round to it - I'm still pretty immersed in Skyrim on the 360.

So when we got the One and found out that there was going to be a Sniper game released for it shortly after I was pretty excited. This gave me the chance to play it on the next gen and given that there are still not that many games out for the One I was unlikely to be distracted by another game. I was excited to see what they could do with the increased power of the One and eagerly awaited release.

For me I think that being available digitally is a brilliant idea for this game, merely because I feel like this game is a good drop-in drop-out title. Don't get me wrong, there is a story, it's just not particularly immersive or - dare I say it - interesting. I am the type of gamer that once playing a story has to continue with it, for fear of getting them mixed up if I try and play too many narratives at one. So with that in mind it is great to just load up, do a mission and go onto something else. No disc changing required. Whilst I was playing this I was also attempting to 100% Watch Dogs (I'm around 97% now and just SO bored with it!) so to mix things up when I felt like Watch Dogs was just getting far too dull I loaded up Sniper Elite III and made myself feel better, before going back to my disc and boring myself to tears (seriously WHAT IS WITH ALL THE FIXER MISSIONS!).

But anyway, I digress. Graphically Sniper Elite III is pretty impressive. As with all Xbox One titles to date, I feel that they're not groundbreaking and often times when you look closely they are pretty patchy, but for the most part they will do nicely. From what I have seen of the previous Sniper game graphics have been improved massively, but that is not to say that this games graphics doesn't have it's faults. I've encountered a fair bit of texture popping and the frame rate drops pretty frequently too. The maps are huge, and pretty detailed so I guess I could say this was to be expected. The graphics are definitely not bad enough for this game to lose any points. And let's be honest the graphics we most look forward to in the Sniper games are the gruesome slow-mo bullet trajectory cinematic kills, which are pretty spectacular. Saying that if you're getting a lot of good shots this feature can get tiresome and make you wish you had a 'skip scene' button available. Never-the-less it is a great feeling when you get THAT particular shot! Yes as I'm sure you all remember it is possible to shoot someone through the testicles on this game. And you're even treated to a graphical representation of whats going on internally. Aren't we the lucky ones?!

This game has allows you to exercise decent control over your difficulty settings. Custom allows you to independently choose the difficulty setting for your sniping and for the AI which I thought was a nice touch - just because I want to ramp the difficulty of the aiming up to realistic does NOT mean I want the AI to notice a fart from a radius of 20 miles. So for my play through I decided to use the top level of 'realism' for my shooting and just normal enemies, and for me this game was a much more enjoyable experience because of that.

Gameplay is pretty good. The controls feel pretty intuitive and I like the weapons you have at your disposal, which are easily accessed through the D-Pad. I LOVE that this game allows you to take your time, think about what you wanna do and scope out the competition. It reminded me of Far Cry 3, which was one of my favourite games from last year in that you could hide in a bush with your binoculars and tag the enemies, making them visible through walls etc. Which yeah I guess seems kinda dumb, but I appreciated it! 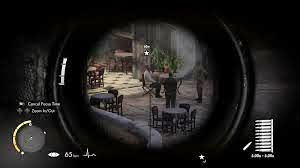 The game is basically map after map of clearing out the enemies and maybe their tanks and vehicles. Yes it does get repetitive, but so does every other shooter going. There are sweet points in each map where there is a generator or something that makes a lot of noise, therefore masking the sound of your gunshots. Get to one of these and your golden, line up your shot and wait for the noise to start. I liked this feature and felt it was definitely more immersive for it.

So up to now this game is coming up smelling of roses really. But the multiplayer is broken, and I mean BROKEN. You can wait forever to actually be put into a match then when you are chances are its a 2v1 which is laggy as hell. It is in desperate need of fixing, but once it is it will be a pretty good multiplayer experience, as when I did make it into working multiplayer games it was great and nothing like CoD. There was real tension when deciding whether making the shot was worth giving your position away. I haven't had a chance to try the co-op modes, as there isn't an option for public matchmaking, and none of my friends have this game on this system. I think this should be changed, as this for me would be a brilliant addition to the game. Don't get me wrong though, even though the multiplayer is broken, it is a game I will be going back to, even solo. The game is pretty easy to just pick up and play when only a sniper will do. Saying that I have encountered the bug which says you haven't left the area when you clearly have a couple of times, meaning I had to redo the mission. That was pretty annoying.

Sniper Elite III is pretty good. Not great nor groundbreaking but pretty damn good. It is what it is I suppose, and makes no apologies for that. You don't like slower paced shooting? Look elsewhere. Hate sniping? Well the clue is in the name. And whilst it is not just a sniper game, it is when using just a sniper and CQC that this game shines. If you're doing it right and sneaking around taking the right shots then there are very few reasons for you to ever break out your MP40. And the CQC is good, like really good. Yeah you could try and run and gun it, but then you may as well have spent your money on something else.

Overall I would feel happy to recommend this game. I feel that the price point is possibly a little high for the game as it is at the moment, but for what this game can become with a bit of patching it is a steal. If you're tired of CoD but still enjoy a shooter, definitely pick it up.