Reviews have slowed down a little here at the minute, I have found myself in the wonderful position of having a LOT of games on my review list - even luckier to have this and a few other big ones to sink my time into. But on the flipside i have also found myself with less time to actually play, let alone write up my thoughts on these games. So here are my rather belated thoughts on Mad Max.

I had never seen a Mad Max film prior to Fury Road, which I only really watched as a precursor to playing this game. I did enjoy it, although not enough to watch the originals. Sorry. Whilst I was watching Fury Road I was imagining all of the things that might carry over into the game and getting myself all excited for the possibilities. Unfortunately, or at least I think it's unfortunate, Mad Max the games isn't a tie in to the film. It shares it's main character and a universe, but ultimately it is a separate, stand alone tale of The Wasteland. Let me explain why I found this disappointing...

Mad Max, whilst it has it's merits, has many, many moments of being just too damn repetitive for its own good. The game feels like a slow trudge through fetch quest after fetch quest rather than the adrenaline-fuelled game I had kinda been expecting. But despite this - which is the thing people have knocked this game for most - I have really enjoyed my time with Mad Max.

I got this at the same time as I got MGS V: The Phantom Pain, a game that is just so pressurised (for me at least) that Mad Max was perfect for counteracting the stress of failing yet again to be anything close to stealthy. Mad Max is a game that gives you multiple tools of destruction to just go wild with in The Wasteland. Yeah ammo, water and fuel is apparently scarce, but I found you always had enough to enjoy a bit of Wasteland carnage. And let's not forget your biggest weapon of destruction - your Magnum Opus - is nigh on indestructible, with the help of everyones favourite mutant, Chumbucket. 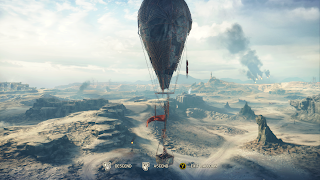 I streamed a fair bit of this game on my Twitch channel (twitch.tv/danniekitten, thanks for asking!) and those who tuned in will no doubt remember how much I sucked at it. But aside from the embarrassment of sucking in front of people from the internet, I didn't care! This is a new feeling for me, I HATE not completing things as close to perfect as possible usually, but with Mad Max I could let it all go and allow my version of Max to die numerous times without so much as an increase in heart rate. It's not that I didn't care about the fate of my character - although now I think of it I guess i didn't really - it was just quite a lot of fun to go into a massive group of enemies all guns blazing, no matter the outcome. Plus when you die and regenerate progress is saved, meaning the next time you take a chance on that particular fort any groups of enemies you amy have killed have remained dead. This is not the case for single grunts however, you have to have killed the whole gaggle of miscreants for them to not respawn with you.

Graphically I thought this game was pretty impressive, especially when you go up in the balloons to scout the map. Because come on, this is a Ubisoft game and they are apparently incomplete until they feature at least 12 things for you to scale in order to fill in a relatively tiny portion of your map. Up close some of the textures are a little 'old' looking, but overall I'd say this game looks pretty damn good.

Obviously you can customise your Magnum Opus, which saw me incredibly excited because I could pick an old American car that reminded me of the Anthill Mob from Wacky Racers. However, this joy was short-lived, as it transpired that you have to go about collecting other car bodies so as to move forward with the story. Not fair. I wanted my Magnum Opus to be my ONLY Magnum Opus, not just one body in a whole catalogue available to me. Not only did that take away from the special-ness (I know that's not a word) of my car, but it also cheapened the whole Mad Max universe. Everything is hard to come by, but whole car bodies?! Not a problem, there's a spare in every junkyard. You can also customise Max, to an extent, upgrading both his clothes (armor) and his beard. Yes, his beard is a customisable object, going from Nathan Drake-esque stubble to full Tom Hanks in Castaway in a few simple steps. I donned the long hair and beard and played the game thinking of my Max as a Wasteland version of Opie from Sons of Anarchy, because I was a little bit in love with him. Not only can he physically be upgraded but you also get to upgrade his skills too, from being able to get more water from source, to being able to wield weapons for longer before the crowbar you were holding splits into two pieces because you hit a bad guy three times with it. Stupid glass crowbars.

The game isn't without it's niggles though. I have already touched upon the repetitiveness of Mad Max, something which irked many other reviewers. Whilst I did find myself kinda bored if I tried to stay in The Wasteland for more than a couple of hours, I found the game to be just on the right side of repetitive. By that I mean that in its repetitiveness is a calmness, you know what you're doing and where you are with Mad Max, something I feel a lot of games lose now in their quests to become 100+ hour games. You can take week long gaps from playing this game and go back to it feeling refreshed rather than snowed under and unable to remember what the hell you were doing last time. My biggest problem with this game was the ability to only climb up things edged in yellow. Knee high sand-ledges are a no go, because they've not been highlighted. I felt this to be pretty condescending if I'm honest, like the designers thought that us gamers would simply not be able to complete the game without these visual prompts. Not only that, but it ruined the immersion - we are lead to believe that Max is this super-capable guy, but show him a ledge that's waist high and covered in sand and suddenly he's completely inept. Bad move.

Despite this though I have truly enjoyed Mad Max and I have been seeing it below £30 on disc recently, a price that I think offers pretty good value for money. The game is good fun, in small doses, but many of us only have a few hours to sink into a game these days anyway, which in my opinion isn;t enough for the boredom to set in. I see it being a £25 special in GAME before Christmas and if I'm right I highly recommend you pick this up.

A code was provided for the purpose of this review.
Posted by Danielle at Saturday, October 24, 2015