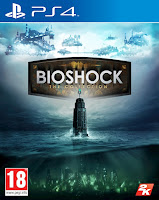 Bioshock: The Collection is available now on PS4 and is priced at £44.99.

I did have all of the Bioshock games on the Xbox 360. I bought the first two at the same time, way past release date (read: cheap) thinking that I'd enjoy them and get round to them fairly soon. Then I played a bit of the first one and scared myself to death before I even got to Neptune's Bounty and have never really played it since. Bad Dannie. I bought Infinite in a Deals with Gold thing ages ago in the hopes it would become backwards compatible at some point - and that I'd have grown some balls and played the first two games through.

If, like me, you haven't played the Bioshock games before then Bioshock: The Collection offers immense value for money. It feature all three games and the DLC and they've all been given a graphical overhaul too. All of this for less than the price of one new game!

It has taken me ages to get around to writing this review, because I wanted it to be a complete review. But, having never played the games before, I can't just dip into each one for a few hours and tell you about how they've changed. I still want to enjoy them and I won't if I have to go to Bioshock 2 and Infinite before I've finished the first one. I was gonna just wait until I had played them all to write this up, but given that my PS4 has been a bit temperamental and I am out of the house more than usual at the minute looking after family I haven't been able to play them as much as I'd like. So I'm gonna do an ongoing review and come and update this as and when I have something more to say.

The PS4 version comes on two discs, one disc for the first two games while Infinite gets a disc all to itself. With the first disc in you just slide left or right to choose which game to launch. They both install separately too, good news for anyone struggling for space on their HDD.

Now obviously I haven't looked at Bioshock 2 or Infinite yet so I can't tell you which looks better now, but Bioshock 1 looks a hell of a lot better than it did originally, the graphics have been cleaned up really well. Don't get me wrong parts of it can still look weak - with the character's being probably the most dated looking - but it does look great now. It's a great remaster.

I have encountered a couple of glitches but nothing game-breaking. A few times it has appeared to have frozen completely but just pausing it for a second has fixed it and I've been able to continue as normal. I've read about a lot of glitches, but in all honesty that has been the worst one I have found.

I'm probably one of very few people that hadn't already played these games. If you haven't played them you've got nothing to lose by buying them. They do offer great value for money for newcomers and die-hard fans alike. Anyone who has already played them can afford to wait for a sale and make these games even more worth it. We do game in the era of the remaster now, but it is refreshing to see a whole collection remastered, rather than just one of a larger whole. And this collection is cheaper than the upcoming Skyrim remaster and many of the remasters we've seen already.

For now I'm going to get back to my play through, but I'll be back to ramble on at you more when I can!
Posted by Danielle at Friday, October 14, 2016