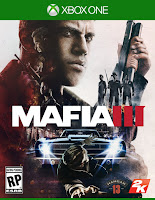 It may seem like this review is a little late in the day. I know some of my followers on Twitter have already played it, and many have already made their mind up about the game. I am sorry it's taken me so long to get this review to you, but I have a few reasons for it; I received my copy a week after release, just as my kids broke up for half term which significantly cuts the time I have to play a game that isn't age appropriate (or thereabouts). Secondly I decided early on that I would complete the game before I tried to get my thoughts out to you guys, for two reasons really; one is that my brother wants to borrow it and the other is that I soon knew that if I didn't complete the game before writing my review the chances of me returning to it afterwards would, unfortunately, be pretty slim at least for a while.

I have looked forward to this game all year. I loved Mafia II and was genuinely excited when I was told I could review Mafia III. The game starts off brilliantly but unfortunately it peters out into a bunch of literally the same quest over and over, ruining the pace of the otherwise fantastic story. I wanted it to be snappy, to feel like I was racing from revelation to revelation without a moment to gather my thoughts. Instead you have what feels like days to think about the last bit of story you received because they are interspersed with at least two enforcers to kill, a load of robberies/breaking things/generally fucking things up for the bad guys and then returning to one of these places to kill the boss - this was by far the most annoying part - by messing with his operation you draw him out but I really wish that they could have just been in the general area and you'd have to hunt them down. It just feels kinda lazy to return to the same factory or whatever again.

The graphics aren't as bad as you have been lead to believe. Everything is a bit fuzzy and yes the sky and water really is a bit crappy but it's all ok. But actually some of the textures are incredible, which I guess kinda make the bad parts look worse. There are some issues with draw distance that saw me driving head on into a car that had just popped in front of me on more than one occasion. The cut scenes look fantastic though, the faces in particular are great to watch, and the lip syncing is pretty much spot on, something some games still seem to struggle with. The story is given through interviews and it is a brilliant touch. I especially loved the grainy effect on the ones from the past, they looked perfect. The voice acting is superb too, emotive and convincing. And it isn't possible to review Mafia III without mentioning it's absolutely fantastic music. This game has the best soundtrack ever. Seriously, it's amazing. I completely understand now why some YouTubers were given vinyl's and record players, this soundtrack is something to celebrate.

Now I wrote the above before I had finished the game. I did toy with deleting it and starting my review again, but that didn't feel fair. Yes, my opinion on the game has changed a little since I've completed it, but that doesn't remove the fact that for the vast majority of this game I was bored and hoping I was getting close to the end. A lot of the time the actual gameplay felt like it was getting in the way of the actual game. Which I realise sounds stupid, but it feels like the dev really struggled to fill this large open world and so it is populated with missions that don't really offer much variation. Repeating the same missions over and over again really detracts from the action of the story in my opinion. And the story is fantastic.

Any of my Twitter followers will know I was starting to really burn out doing this review. And I think this is the biggest problem with Mafia III, it is super hard to have a huge gaming session without ending up feeling a little bored and burnt out. This game is not designed to be played in large chunks, and if I could have played it slowly, maybe a couple of missions a day I likely wouldn't have felt so bad about it. Luckily the last few hours of the game really picked up the pace again. I played it for four hours straight on Friday night and enjoyed every minute. It was exactly what I wanted from the game and has made up for some of the boredom I felt whilst playing the middle bit. I actually want to play it again to get the other ending, but not just yet. I'm not completely crazy.

Overall I would recommend this game to anyone who has considered picking it up. It isn't perfect by any stretch of the imagination, but the story is well worth experiencing. Just take it slow and play it alongside something else too so you don't end up burnt out and hating it. It does get better, I promise.

A copy of the game was provided for the purpose of this review.
Posted by Danielle at Monday, November 07, 2016