The Civil War table is available now on the XBLA Marketplace for 240MSP.

This table is taken from the Marvel comics that featured, you guessed it, a Civil War. The war was based on the Government wanting all mutants to register, Iron Man was all for it, Captain America not so much. 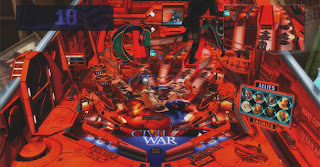 The table starts off with a really cool extra. You can choose to start off with the massacre at Stamford. If you do you get two balls thrown into play. Drop one and the other automatically drops out too. The point of this is to rescue people from the attack. the better you do the higher your score and this is all added together at the end. Nice.

You then decide which side you want to play for. I agree with Captain America, but I think Iron Man is way cooler so I choose his side. I'm that bad at Pinball thought that it probably counts as me fighting for Captain America. I am truly awful at this game.

It doesn't mean I don't have fun trying though. I used to love playing Pinball on my dad's old PC years and years ago. Until the original Sims was released anyway. Then it was good to play a game I didn't totally suck at.

So once you've picked a side it's time to start recruiting! There is a little table of eight other mutants in the bottom and by hitting the various bits and bobs on the table you get them to join your team. The reason you want a big team is because this gives you more allies when you start a fight. The fights are pretty cool. My son (who is Superhero mad) was so excited to see Iron Man diving across the table to fight Captain America.

This table is pretty challenging. I've always got by with Pinball games by mashing the triggers but this one needs a little more finesse though. This only adds to the fun though and this is a brilliant table. FOr the meagre price of 240MSP you'd be silly to not snap this up!