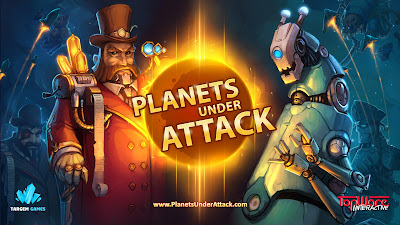 Planets Under Attack is available now on the XBLA Marketplace for 1200MSP.

This game isn't as bad as many, many other attempts at strategy on console. But it isn't all that great either. It can feel like you are totally being snowed under sometimes and the game becomes a constant battle to keep up with yourself. 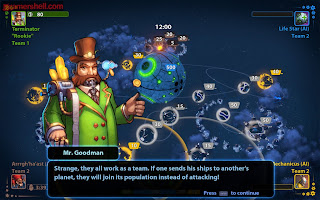 IT'S 3D is what my boyfriend yelled when first launching the game. He's right. And the 3D is VERY impressive. The planets do really look like they're floating around in the room with you. It's very strange. I have to be honest I'm not such a mad fan of 3D, it strains my eyes fairly quickly, but it is nice to be given the option. And the graphics are beautiful!

Each stage or level has loads of planets, some are moving about in orbit and others are stationary. Capture the neutral and enemy planets and bobs your uncle. You can then upgrade them to suit your galactic needs best, be it population increase, making more fleets, money makers or just plain old defense. You don't control your armies or anything like that, it is not a totally in-depth strategy game, you just choose how many of your ships to throw at a planet in an attempt to take it over.

Then the game for me anyway, all starts to fall apart. Not necessarily in a bad way. But I am naturally quite a stressed person. Couple that with OCD tendencies and this game plays havoc with my head. As I mentioned before i felt like I was always chasing my tail, I couldn't keep up, for what felt like ages, with what I needed to be doing and what was happening. Stressful!

Be that as it may though, once you get into the swing of things and you've worked out your strategy (duh) this game is fun. Difficult to get into, but even more difficult to put down. Anyone who has even once enjoyed a strategy game should probably pick this one up.