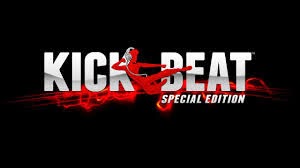 KickBeat: Special Edition is coming out next week and the nice guys at Zen Studios sent me a code over so I could review it for you!

KickBeat is a rhythm game with a twist. Rhythm games have been pretty popular over the last few years, and in my mind peaked with the amazing Rock Band Blitz, which I loved when I reviewed it. Rock Band Blitz, however good it is, doesn't give you much to look at other than the buttons that mess with your vision long after your finished and this is where KickBeat comes into it's own.

KickBeat is Kung-Fu themed. Yes, really. Kung-Fu. The main protagonist fights wave after wave of enemies as you press the buttons. There are even 'Boss Levels' (The first of which is really good fun and played out to my favourite song off the game 'The Beautiful People' by Marilyn Manson). When I first read it I have to admit to thinking it'd be pretty bad. But when you think about it Kung-Fu does seem pretty rhythmic. I have NO experience whatsoever in the martial arts so I'm not sure how true that is, but certainly when you see a martial arts sequence in a film or whatever the choreography certainly makes it seem that way. 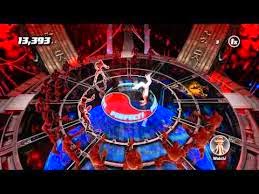 When you first load the game it looks pretty budget, just from the menu. But I didn't immediately go into the story mode (which is a rookie error BELIEVE ME!) so didn't see straight away just how gorgeous the art style is. It's hand-drawn and really is beautifully done.

So not being a complete idiot I did go to play through the tutorial first. Which would be a good idea if they weren't so boring. I know a tutorial is never going to be the most fun part of a game, but with rhythm games the music drives it, makes the player feel energised and the tutorial features a metronome only. There is a lot to take in with this game at first I feel, but nothing that doesn't make sense eventually (like holding the button down if the enemies are leaving a yellow trail behind them) and it does all feel very familiar if you have ever played another rhythm game. 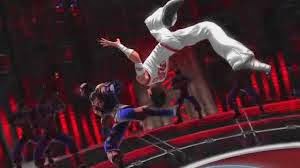 I only stuck it through the first level of tutorial at first before I just wanted to play to some music. And this is where I made the biggest error...please don't make it yourself. I went straight into Survival mode. Survival mode is TOUGH. Which is great as you get better at the game and definitely adds to the longevity of it, but as a newbie it SUCKS! It is SO difficult and for about the first seven attempts I lasted only somewhere between 20-40 seconds. Which the first time I told myself wasn't too bad, until I realised that Survivor mode is graded in the amount of TRACKS YOU CLEAR. I still haven't managed to clear one!

So I ventured into the story mode. Which is OK. The story isn't as bad as it could be, but come on, it was never going to be groundbreaking either. The reason I prefer the story mode is for the pure fact that there is a learning curve present with it, whereas in Survival mode you are just thrown in at the deep end.

I did have to really battle against myself with this game though. By this I mean that because you are fighting enemies my natural impulse was to mash their corresponding button so as not to get got. Which, inevitably, lead to me getting battered. It is something that I really struggled to quell, as I'd see them moving closer and closer and just want to strike. Old habits die hard I guess.

There are some breaks in the game which shows your character pull a cool move on the last enemy they attacked. I actually really enjoyed this as it showed how much the developers have thought about the music and how much thought they put into making it fit the game perfectly. These moments always happen at a natural break in the rhythm of the music, like in the bridge before a chorus for example, and really help keep the game flowing, giving the player a moment to relax their stressed out fingers.

This game is tough but it is fun. There is also a Split-Screen mode, so that you can play against a friend which is a really good feature, and definitely one that a game like this needs. It is tricky but in a good way really, as I for one definitely don't feel I'll ever be proficient enough at this game to tire of it. There is plenty of life in it, and is a good one to load up if you have a few friends round for a last man standing type of game. I'd say that it is definitely worth trying!

6/10 TRY IT!
A code was provided for the purpose of this review
Posted by Danielle at Friday, September 19, 2014