TownCraft is available now on Steam and is priced at £6.99. It is available for both Mac and Windows. This review was played on a Mac.

TownCraft is a slow game, incredibly so. it's "a chill-out crafting and cit-building game" that takes the chill-out side of things very seriously. I have actually fallen asleep playing this game, but that's not necessarily a bad thing.

TownCraft sees you build a medieval town from the very beginning and grow it. There are no stats for your player for you to worry about, hunger and tiredness are not a problem to your little sprite. You simply collect and build, rinse and repeat.

This game will obviously not be liked by everyone. Anyone who solely loves the bang-bang pew-pew of an online shooter are not catered for with TownCraft. At all. Looking for  change of pace though? Well this one might do it for you. Unless you like your story to progress at anything other than a snail's pace. 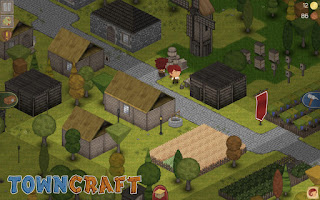 It's a game type that I feel has been done to death, and TownCraft doesn't bring anything new to the party. It's simplicity is both its best and worst feature. Its great to burn an hour or so on when you just feel too burnt out to concentrate, because you really can't go wrong with this game. There isn't ever a sense of urgency, just do what you want, when you want. But it's also so simple that if you're even slightly switched on when you play, you will realise rather quickly there are better things you could be doing with your time.

It feels like they were gonna do more with this game. There are items in the game that would have a use, if the game was more immersive. Instead, all you can do is sell them. There are a myriad of things that would have made this game a better one, playing as 'God' would have been waaayy better, as you're character is just so damn slow.

Another problem I had, so many other Mac users may is that I had to move my dock because it kept interfering with the game interface. I had my dock at the bottom of the screen, set to disappear unless it was hovered over. I had to move it to the side, because I kept accidentally opening up Sims 4 when trying to use the buttons in TownCraft. Not good. Sims 4 takes ages to shut back down.

I'm struggling to think of anyone to really recommend this game too. As I said if you really want a change of pace, maybe check it out. But it's definitely not one I'd say you need. There are many other city-building games that are better, and offer more of a challenge. If you're the most casual of casual gamers who does;t really enjoy a challenge, then try it.

4/10 TRY IT!
A code was provided for the purpose of this review.
Posted by Danielle at Thursday, September 03, 2015