Wow! This was an explosive episode of my favourite Telltale episodic game yet. Yes the Game of Thrones game has managed to kick The Wolf Among Us off the top spot for me. That's a big achievement.

So. You pick up where you left off, obviously, which for me meant feeling shitty that I hadn't stopped Beskha from being hurt by the dragon seeing as she has stuck with me for a long time (or so it seems). This was just one of many regrets I have in this game. I can't wait until they are all out so I can play it over and over again, correcting all the things I have done wrong. Hindsight is a great gift in a Telltale game. But for now I am sticking with the decisions I make in the extremely small amount of time that they give you. And it sucks. Big time. 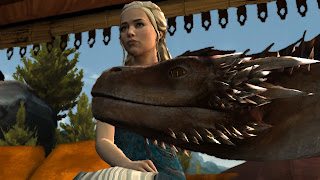 In the fourth instalment of the Game of Thrones game we get to spend quite a bit of time near/in Mereen with Asher, Beskha and Malcolm(?) Asher's Uncle. At the end of the last episode they had come face to face with Deaenerys. She isn't happy with me, but gives me a job to do - help her to take control of Mereen. I have to admit I absolutely love the nods to the show and how it is all interconnected. Anyway, things do get hairy for a bit, and she gives you the choice of approaching her dragon Viserion. I declined. I'm not absolutely mental.

Gared's story, as I thought, did play a great part in this Episode. I won't ruin it, as you know I am spoiler-free, generally. But suffice it to say that this part of the story is picking up quite a bit. Up to now, I've kinda hated playing as Gared. I hate his whiny voice, and that is mostly my beef with him, because actually his story hasn't been too dull. I just preferred everybody else's before and couldn't wait to get back to them. This is the first episode that I have not wanted Gared's segments to end. A great achievement.

In the previous episodes I guess I kinda forgot that it is clearly running alongside the show, seeing as it shows snippets of both the Red and Purple Weddings. I pitched myself to Tyrion when playing as Myra, forgetting the absolute mess he spent much of last series in. Oops. For now, at least, it seems no one is too mad at me for this. Maergery Tyrell is being a bit funny, but by this point it could be for a number of reasons. I have decided to play Mira as a pretty selfish girl, except for when it comes to her family. So there aren't many people in King's Landing that haven't been thrown under the metaphorical bus for her to get what she wants. And in this episode I was faced with protecting Sera's secret so that she could marry a Lord, or ruining this happy ending by telling him that she is a bastard. Guess which I chose? King's Landing has done horrible, horrible things to me. I am dreading what Sera will say to me when she inevitably finds out, but I figured better to not piss off a Lord. I hope I'm right, but I guess we will have to wait and see. 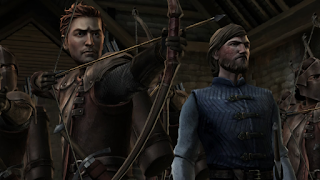 House Forrester, as always, is a hub of much discontent. They don't seem to have many friends, do they? In this part I will have to say SPOILER ALERT, as I'm not sure how my decisions in the previous episodes have changed what happens here. I managed to save my relationship with Elaena Glenmore, and convince her to marry me in one of the previous Episodes. She turns up with her brother Arthur in this episode, and 20 of their father's best men. YES! Her father has decided that she should marry Gryff Whitehill instead and she has come to see whether I can help her. I am concerned however, as I told her that I would kill Gryff. But I didn't. I didn't mean to save him really, but I accidentally said that I'd trade him for Ryon. I'm hoping I'll be able to double cross him when the trade comes in the next episode. The moment I got to confront Gryff Whitehill was THE BEST. It was perfect. I used the move that Ser Royland had taught me before to bring him to the floor and then banged my cane to bring the Glenmore soldiers in. It was spectacular.

So again, there have been many twists and turns in the fates of the Forresters. And, again, I am eagerly anticipating the next episode. A month is far too long to wait for a game this good. If you haven't already bought it, wait it out and save yourself the pain of having to wait after you've played the newest episode through on release day. The pain is just too much to bear.

Email ThisBlogThis!Share to TwitterShare to FacebookShare to Pinterest
Labels: Game of Thrones, Review, Telltale, Xbox One