I initially wanted to get this review out on the day of release. But I couldn't because I couldn't get far enough in the game. I am now better at it, though not near finishing it, so I decided I could finally give you my thoughts.

Shovel Knight is great fun. The graphic style is a great nostalgia hit, and the accompanying music is PERFECT. I have recently got my Mega Drive back from my parents house and set it up to play with my son and when we loaded this up he asked me whether it was a Mega Drive game. Props to Yacht Club Games. 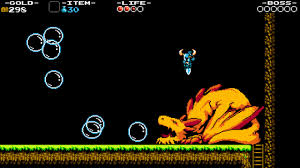 So as I mentioned at the beginning of this review, I found this game hard to master (which I haven't actually done). By master I mean, actually get good enough to get past the first level without dying so many times my son turned away bored. I am better now, marginally so, but even so this game is so fun that I didn't mind dying. Normally, my OCD would kick in with games like this, and I'd be thinking about everything I've lost and getting myself all cross, but in Shovel Knight you drop your little bags of loot upon death, leaving them there for you to collect. YAY! This, inevitably, leads to little bags of gold floating over areas of certain doom but it didn't stop me trying, and subsequently dying and losing more loot. :( 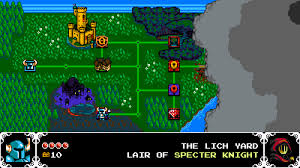 Shovel Knight is a game where you play as a Knight (duh!) wielding - you guessed it - a shovel. The shovel it turns out is a great weapon. You can slay enemies with it, and also use it to bounce off enemies, a la Mario. You can also use it to bounce off bubbles, enabling you to get higher. You go around killing everything and digging all the mounds of dirt and hidden walls to collect loot and extra gubbins such as a fishing rod that allows you to fish in the ditches for more loot.

It sounds simple, and it is. But simple games done well are rare and Shovel Knight is done VERY well. It is a perfect game for some pick-up-and-play action, but three hours later you will find yourself still sat there playing. It is great fun and an amazing nostalgia hit to anyone lucky enough to have played old 16-bit games. The price I feel is more than fair for the quality of game you get, but by all means wait for a sale to pick this gem up. Do yourself a favour though, and definitely do it, you won't regret it!