Sparkle Unleashed is out now on Xbox One and is priced at £6.39 (random?!) with a 20% discount available for Gold members. There's an Austin Powers joke in there somewhere...

Anyway, Sparkle Unleashed is a match 3 ball-shooting puzzle game akin to the likes of Zuma on the previous gen. Now I have a little secret to share with you...Zuma was my ultimate guilty pleasure on the last gen. I spent (read wasted) many an hour on the ball-busting games Zuma and Zuma's Revenge!, much to my partners disgust. So when I first saw Sparkle Unleashed I have to admit I got quite excited.

Sparkle Unleashed sees you control a little catapult that can move left to right along the bottom of the screen, unlike Zuma's stationary but twirl-able catapult. I did really struggle with this at first due to many areas of the map being unreachable if you have a snake longer than 5 balls, but I suppose that's the challenge of the game. The catapult holds two balls, which you can switch between by tapping 'B'. The mechanics and the general jist of the game are pretty standard fare for this type of game. 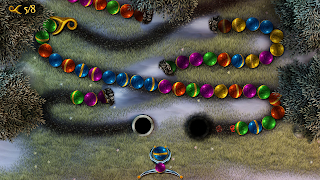 But Sparkle Unleashed tacks on a 'story' of kind. To be honest this isn't what I play this type of game for, so in the brief moments of unskippable one-line narrative I found myself reaching for my phone and checking on Twitter, so I can't really comment on it. Well I suppose it didn't seem that interesting. From what I can gather though you're on a quest to somewhere for something. Yeah, sorry. So you make your way through a forest and every few stages come to a brazier, which gives you a magic key. These magic keys unlock powers such as Orbs that change the colour within the blast zone, and my personal favourite, a tribe of purple butterflies that eat the balls that are closer to the hole.

Sparkle Unleashed gives the Xbox One a polished ball-shooting puzzle game that has definite longevity. I am currently completely stuck on Stage 107. It looks like I am close to the end of my quest but a quick look at the achievements shows that there are two more difficulty levels. There are also lots of Challenge levels. So for little more than a fiver (if you're a Gold member) I feel like you get a lot of game for your money. Yes it's the same thing over and over, but the same can be said of an FPS really. It's graphics do cheapen the game a little, but the game IS cheap, so I don't feel too upset by this. I'd say if you're looking for a game that's easy to pick up but difficult to master then you could do much worse than pick this game up.

PS. Upon re-reading this review, I now realise how many times I mention balls. And holes. I did try to think of ways to reword, but let's be honest that would be ridiculous. If, like me, you giggled a little reading the 'eat the balls that are closer to the hole' line then congratulations. You and I clearly never matured past high school! :)