The Swapper (Xbox One) - Review

The Swapper is available now on Xbox One and is priced at £11.99.

The Swapper is a puzzle platformer that actually feels truly unique. Pretty rare now, huh? This game puts you in the shoes of a man who can clone himself. Multiple times. Yeah, this game freaked me out.

Your clones are not capable of independent thought or movement, they copy what the player does. So whilst I got to grips with this I sent many a clone hurtling to their death off high ledges. I got there in the end. And I was fine whilst I just had my little army of clones to deal with. I wasn't worried about my mindless clones. Didn't care that they disappeared if I ran into the light, unless that is them disappearing effed up my solving the puzzle.

But then you get the ability to TRANSFER YOURSELF INTO ONE OF YOUR CLONES. And that was it. From the moment I had to leave Mr Astronaut behind and continue my journey in one of the 'mindless' clone bodies I was completely stressed out. I couldn't stop thinking about the poor man I had abandoned. And that's what this game has set out to do I suppose. Question the morality of cloning, the practicalities, and of course impracticalities of it too. 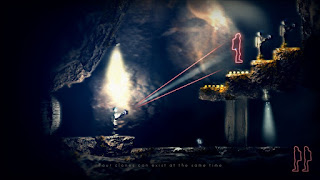 It's a sci-fi puzzler set in the future (obviously). The puzzles are great, though they are really difficult. But isn't that what you want from a puzzler, a bit of a challenge? You get that by the bucket-load with The Swapper. And even though I did struggle I could still admire the puzzles, they were very well designed. There are areas that restrict clone placement, or swapping to clones that really force you to rethink, making the moment you solve it all the more satisfying. And there are other things to do in The Swapper too. Backtrack on yourself after you have unlocked a new ability to explore more of the ship and find out more about it.

The graphics and sound to this game are fantastic too, and really aid the overall feel of the game. Although it did take me awhile to work out how to turn my character around, so for awhile whenever I had to run in another direction, I basically moonwalked there. It was actually pretty funny.

You will go through a bazillion clones before you complete this game, and if you're anything like me you will still be thinking about the poor guy you left right at the beginning. It haunts you. Or at least it haunted me. At points I honestly didn't want to put the game back on because of it. I know, I know, that's incredibly silly, but the questions posed in this game really stuck with me. This game is more than a simple puzzle platformer. I mean the puzzles are by no means simple, but more than that this game can be considered as true art, in my opinion. £11.99 may seem steep for a puzzler, but this game feels more like an experience. Wait for a sale if you want, but I wholeheartedly recommend you play The Swapper at some point.