Lifeless Planet Premier Edition is available now on the Xbox One and is priced at £15.99

Lifeless Planet started life as a PC game. It has now been given a visual lift and repackaged as the Platinum Edition to be brought to consoles. It sees you take control of a scientist that has seemingly been sent to another planet looking for the existence of life. This planet was apparently lush with flora and fauna when observed from Earth but upon crash landing it becomes clear that something is amiss. There is no evidence of life anywhere, no greenery, just a barren wasteland for miles around. There are some tracks visible, so with nothing better to do we follow them and the story begins to unfold.

Lifeless Planet is definitely more of an 'arty' game in my opinion. It's a gaming experience that you won't soon forget, but that doesn't feel much like a game. With that I mean it isn't action packed, it's story telling feels slow and methodical, and it doesn't throw jump-scares and action sequences in your face. It's an exploration game first and foremost, with a story given to you through reading and some smooth voice acting. The sound in this game is fantastic, really atmospheric and so believable in the game world. When your scientist speaks you hear the crackle of the speaker in his helmet, the little breathes he makes. There is no in game music, just the sounds of your environment. It is truly beautiful. Now obviously you have a reason to explore. You want to find out where you are, what happened here, where is your crew? A little later on you start to notice green footprints everywhere, leading you through danger. The rest of the game pretty much sees you playing catch up to this chick. 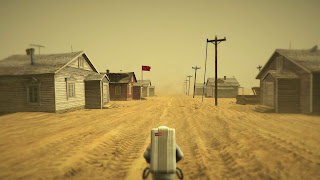 I'm not going to go into the story anymore than I have. I feel that this game is limited in it's replayability so if I was to tell you about it, there'd be a chance you wouldn't play. And you should play. Lifeless Planet is spectacular. It's a lonely foray into another world, that feels so true to itself. Yes there are some annoying collectables, they seem to have found their way into every game these days, but they are not numerous enough to make them completely unachievable and they do give you a little more insight into the world, which can't always be said of some games collectables. The price point I would say is a bit of a sore point. I feel it is a little on the expensive side. As good as the game is i can't see myself returning to it really. I may give have a go at completing it in under four hours for the achievement at some point in the future, but I can't say that that is something that features on my agenda at the minute. There are far too many game sin my backlog now to return to a game and replay the same story again. I think something is lost in Lifeless Planet if you know what is coming.

In saying that I don't mean that this game is not worth picking up though. If you have £16 burning a hole in your pocket then go for it. But I feel a sale will not be too far away for this game, so wait until then if you've got plenty to be going on with. Graphically this game isn't that impressive. It looks fine, but there are no beautiful vistas for you to screenshot as your Xbox background. Then again how beautiful can a wasteland be?!

9/10 BUY IT!
A code was provided for the purpose of this review.