Slice Zombies for Kinect is out now on Xbox One and is priced at £7.99 (there is a 20% discount available for Gold members at the minute though).

My son and I have been playing this game since last night. And unfortunately I have found it to be plagued with a problem that makes it impossible to play at the minute. Literally, as 3/5 times of booting up the game it refuses to pick either of us up. We took turns standing in front of it waving like maniacs to get the little hand to appear so that we could actually press the play button to no avail.  Each time this happened we had to quit out of the game and reboot, and on average it took about three reboots each time before it saw us. When we do get it to see us initially though it picks both my son and I up exceptionally well, unlike some Kinect games my son has played which struggle to pick up the movements he's making with his spindly six year olds arms. With Slice Zombies for Kinect he has been able to play without getting frustrated, which is great.

Slice Zombies for Kinect is very obviously based upon Fruit Ninja. Except now you're slicing zombies. Obviously. The gameplay is much the same as the Classic mode in Fruit Ninja, with you having to slice zombies and coins and avoid slicing the bombs to complete the level. You initially have three lives, but once you have swiped enough coins you can buy an extra one in the store. 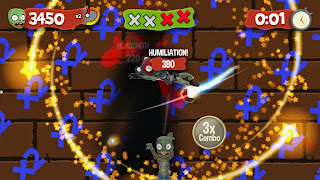 The zombies are very cartoon-y, clearly based upon Plants vs Zombies, which makes it a great one for kids to play. When I initially told my son about this game he told me he was a bit scared of  zombies, but once I'd shown them to him he loved them, they are completely unthreatening. Little hands crawl across the screen too, which had my son howling with laughter as he chopped them up.

Slice Zombies for Kinect does only have this one game mode, which gets progressively harder as you level up. It is a shame, I would have liked to see a few more modes - a co-op one especially - but maybe these could be added in future updates (hint hint, Made!). It is a fun game though, and at it's current price of 20% off it's a steal for anyone who still actually wishes to use their Kinect. Families with children especially would benefit from buying this game, all kids like Fruit Ninja and Slice Zombies for Kinect offers kids the chance to whoop some zombie ass. The difficulty progresses well but as I mentioned earlier a few more modes definitely would help to propel this game to greatness.

7/10 TRY IT!
EDIT:
I have been in touch with the game dev today, and they explained that to work the menus you have to salute, which solved many of the problems present in the game. They have also confirmed that they did have plans for many more modes, but unfortunately being a new dev they ran out of money. Please buy this game and support these devs so that they can continue doing what they love, and hopefully bring more to the game via updates.

A code was provided for the purpose of this review.
Posted by Danielle at Friday, May 08, 2015