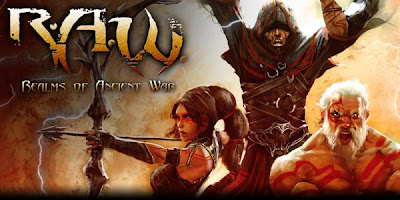 Realms of Ancient War is available now on the XBLA Marketplace for 1200MSP.

Now I have mentioned many a time how much I LOVE co-op dungeon-crawler RPG type games. Once the kids are in bed me and my other half pick up a controller each and go to town. RPG games are for us the creme-de-la-creme and they have an extra cherry on top if they're co-op. 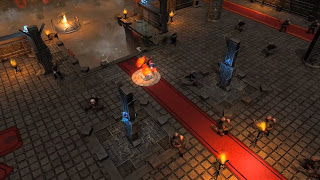 So, by rights we both should have loved this game, right? Wrong. I have found it very difficult to carry on playing this game for the purpose of this review. I have lost interest in this game more times than I can count and have frequently turned it off to look for fun elsewhere. He likes it though, he's not overly enthused by it but he doesn't quite understand why I am SO bored by it.

Off the bat you pick between the three characters available, a mage, a warrior damage-dealer and a rogue. We both opt for the same characters we always do...he the warrior and me the rogue. Upon choosing them you are dropped straight into the game and it all starts to fall apart.

NO WORLD MAP! NO MINI-MAP! Quintessential in an RPG no? Well say bye-bye because this game only has a pretty useless world map INBETWEEN levels. Not good.

RPG's for me have always been best when there is at least a lose basis of tactics involved. R.A.W laughs in the face of tactics and doesn't even give players the option to roll, dodge, counter or otherwise. Just keep hitting, keep bashing the attack button and your golden. VERY, VERY basic. It means you just stand trading damage with others and running when you seem a little bit f*cked. Mage class is where this is worse, obviously, and when we did attempt to play as the mage the game just verged on the ridiculous. 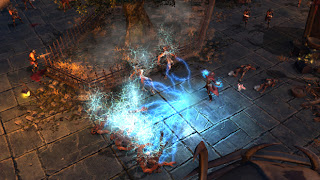 The skill 'tree' (I have used this term VERY loosely as you'll see) is again extremely basic. There is no real tree. Each character has a certain amount of skills that they can level up three times. Done. It doesn't really offer any chance for customisation, something which I feel is very important.

The graphics are pretty good, everything is pretty dark, but I can't really pick on anything except the pretty crappy attack animations. They're just a bit jarring. The music is alright too, pretty atmospheric, but nothing too exciting.

Too sum it up there just isn't really anything to this game. It's very basic and monotonous and has no stand-out good points. It is what it is. Priced at 1200MSP I think this game is a total rip-off, maybe priced at 800MSP it'd have a chance. 1200MSP just seems like far too high an asking price for the quality of game you get.

If you love dungeon-crawlers and it goes on sale, maybe give it a go. Otherwise I'd say skip on this one.

4/10 SKIP IT!
A code was provided for the purpose of this review.