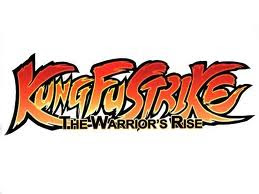 Everybody loves a good beat 'em up right? Kung Fu Strike: The Warriors Rise could well be for you then.
Now I'm going to start off by saying this...If you get easily frustrated with games, replaying levels etc. this game probably isn't for you. This game is HARD.
I had read other reviews before starting up the game myself, and I have to admit I found myself laughing at all the people who had found this game difficult. How difficult can a beat 'em up be? Turns out pretty hard. 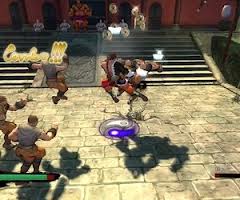 It starts out easy enough. Plenty of enemies to button-bash your way through. Button-bashing can actually get you through a few of the first levels. I was congratulating myself on not being beaten by a game that had beaten so many others when I hit a brick wall of difficulty. I could button-bash no longer.
Some of the enemies started carrying around sticks. So now I had to learn how to deflect, something which I picked up quite quickly. So I deflected and counter-attacked through the next few waves.
I've got to admit I was still finding this game quite easy. The first point I thought it was getting real tough was the little old guy boss who has glowing purple circles around him. He also regenerated health, so as I was running around trying to avoid his attacks and his purple circles of power he was just casually getting further away from death. He was VERY annoying, and lead to me restarting numerous times. After that the game just kept getting harder and harder. There was another boss a little later on and it was nigh on impossible to get near him, he was RAPID.
I don't think this game is too hard though, unlike a few people, I think that the difficulty level is about right. Games SHOULD get progressively harder, they should be a challenge. Games these days are getting too easy, so it's nice to have to flex your fingers and pump yourself up for an hour of actual challenging gameplay. The bad points about the difficulty of this game though, is that it's not only difficult, but it can be pretty tedious, resulting in some VERY frustrating moments.
This game centres around a young prince, Loh, who is trying to avenge an epic betrayal. Thus begins the 28 stages of the game, fighting through wave after wave of enemies in the hopes of finding the one who caused Loh's downfall. Yeah the story is pretty weak but come on, what beat 'em ups have a really epic story?! 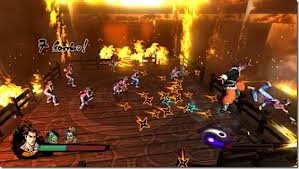 You earn currency when you kill enemies, and every so often they drop baskets of eggs and other food items to replenish your health. Currency can be used to buy more moves, increased HP and so on.  You can also, after awhile, start deploying your own armies to help you with the waves of enemies. This is a pretty neat feature and there is a good variety of armies to choose from. This will set you back some of your hard earned money, so choose wisely!
This game does feature a two-player co-op campaign that was pretty good and made the game a little less challenging. Versus mode is also a feature where you can face off in four arenas. Multiplayer is local only, a big downside in my opinion.
Overall this game is a pretty good offering. It's not going to suit people who are out for an easy ride. But if you've got sick of completing games without breaking a sweat this game is for you. The multiplayer, whilst lacking an online mode for me makes this game a must buy, there is nothing better than wading your way through a load of enemies with your friend. The story isn't all that interesting, but sod it who cares? This game is old-fashioned beat 'em up fun and it reminded me of the old games on the Sega Mega Drive...damn difficult but bloody enjoyable too!