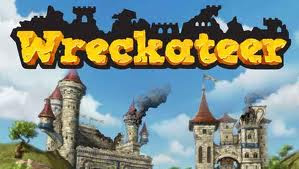 Now I have to be honest, the Kinect is rarely used in my house. The three year old messes up the sensor and by the time he's in bed I just want to sit down with a controller in my hand. Wreckateer interested me though, and when I learnt it was a Kinect Arcade title it didn't put me off. This game looked like loads of fun!
Think 'Angry Birds' for Kinect and you've got the basic gist of this game, but to all the cynics who say it's a carbon copy...you are wrong. 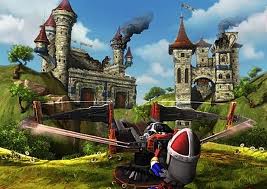 Yes in it's most simple form you're throwing things to knock other things down. BUT Wreckateer does have more features than just aiming and hoping for the best. Firstly this game actually works really well on Kinect. I have to say I'm surprised as the last few Kinect Arcade games I've played have been pretty awful to be honest. But this game reacts how you'd expect it to react. You clasp your hands together to grab the ballista, pull back to build up the strength of your throw and then throw your arms wide to let it fly.
Then you can use aftertouch on the ball. You basically flap your hands through the ball to make it go in the direction you want. There are also special abilities which are activated by throwing both your arms in the air. Bomb Shots detonate (duh!) Split Shots split your ball into four smaller balls, whilst Speed Shots whiz off in a straight line. Lift Shots give your projectile a height boost, and can be activated three times. The best by far in my opinion though is the Flying Shot which gives your ball a motor and wings, letting you fly around the level. 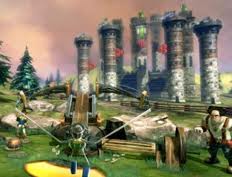 As I alluded to before, this game had no problem tracking me. There was a slight problem with space, but with hindsight this was probably my fault. When asked to stand at the back of your play space DON'T, as when in play you do need to stand further back to build the power in your shots. Once I'd realised this my play space was fine. Before I had I'd been more or less climbing on the couch to power up my shots!
The game, whilst it is fun, does get tired after awhile. You are basically doing the same thing over and over. But don't play it for a long amount of time t once and you probably wouldn't notice this. I personally have been playing this with friends, the odd hour every few nights and it has remained fun.
The game does spike in difficulty. For me it was really sudden, I just suddenly found it nigh on impossible. I am somewhat coordinationally-challenged though and my friends did manage to battle through eventually.
This game also features a two-player offline mode. It's pretty much the same again, you take it in turns to knock things down. Whilst it isn't new, and doesn't mix up the formula in anyway it is nice that it has been included.
This game is fun. It doesn't push the boundaries of originality obviously but it is brilliant fun. Competitiveness rages between me and my friends to see who can get the biggest multiplier and the highest score. Arcade Kinect titles in my opinion have been pretty bad to date, this one would make a good addition to anyones lagging Kinect game collection. I know my Kinect was rarely used before and this has definitely made me more likely to dust the poor thing off. This game is definitely worth trying, and at only 800MSP in a market now saturated with 1200MSP games it ain't that dear either.

Posted by Danielle at Saturday, September 08, 2012