March to the Moon (XBLIG) Review 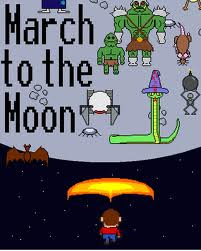 March to the Moon is out on the XBLIG marketplace for the very fair price of just 80MSP.
A vertical shoot 'em up akin to Space Invader this game is a LOT of fun. Shoot through wave after wave of increasingly difficult enemies to level up and unlock more items.
This game does have RPG elements, which for me make it a lot better. I love games that see you having to invest in your character, to play to your strengths. There are 12 different skill classes to choose to level up in this game so there is a lot of variety available for everyone! This game is infinitely playable, create character after character if you so wish with different classes to see what works best for you. Unlock clothes to customise your character. For a game that has simplicity at it's core, I think these elements really bring something special to the game. 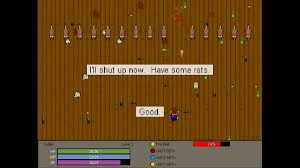 So the game starts with you offering to clear out a basement of rats. See to these and you are treated with wave after wave of them. Rats that shoot you, bats, goblins, alligators, cows, pigs and chickens are all going to be slaughtered as you March to the Moon.
This game is pretty difficult, but not so much so it becomes dull. It is VERY addictive and every time I died I found myself furiously tapping the 'a' button to start again as soon as possible.
Now this kind of game can get very repetitive. March to the Moon steps away from that by offering a 'reset' button at the ned of each difficulty setting. This adds more story and new one-liners to the previously seen levels. It does re-use the four previous settings but as I say it doesn't really feel repetitive.  Hitting the 'reset' button also expands your already huge skill set tree.
Getting the balance of your skill tree right is of paramount importance in this game. Put your experience to use in the wrong way could result in a lot of restarts. Another awesome feature of this game is that you can press the RT button to get your experience back once you've learned from your mistakes. Your character truly evolves with the game.
This game is pretty large in scope. There are 8 levels in each of the four worlds and then three difficulties to battle through, making 96 stages of vertical shooting goodness.
This game for me is a must-buy. I don't really know of anyone who could say this game isn't fun and afterall isn't that what we want from our games?

Posted by Danielle at Thursday, September 13, 2012