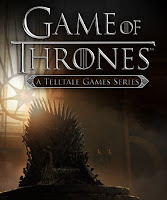 The next instalment of Telltale's Game of Thrones game came out last week. Episode Five of Six (eurgh how can it be almost at the end?!) is entitled 'A Nest of Vipers' and picks up where we left off, obviously. But is Episode Five as good as its predecessors?

I have to admit to being bitterly disappointed with this episode. It definitely feels like the lull in the series and has left me wondering whether Telltale should have just stuck to a five episode series as they have done with all games prior to this. It clocks in at very little over an hour long, and when you consider that much of this hour is spent watching cutscenes this episode really does fall short of what you would expect from Telltale.

I could forgive this though if it was edge-of-my-seat storytelling, but aside from the last few minutes which were pretty damn good, it really isn't anything that special. It feels very much like they are tying off a lot of lose ends ready for the next episode, but none of it is that exciting for now. And maybe I was being silly but I was kinda expecting this to be the best episode of the game, seeing as the penultimate episode of the show is usually the one where all the shit goes down.

This episode was the first one where I found myself plagued with bugs too, which was really unfortunate. For the vast majority of my playthrough I had little to no sound, something which was definitely not a problem on my end as some sound was getting through. There is nothing more disengaging in a game like this as having to do the RTE's with no sound effects. I found myself having to dodge blades with no real indication of whether I had actually dodged it effectively or not and with no real warning at all. For the most part the speech came through fine, it was the sound effects that didn't and I have to say I'd have preferred it the other way around, at least with speech you have the option of viewing subtitles.

All this being said it was still a fairly enjoyable foray into the world that Telltale has envisioned. We got to find out who was the traitor inside Ironrath, and I would be interested to see whether it changes depending on decisions you have made throughout the game. Things come to a head for the Limping Lord of Ironrath and the end of the episode is truly frantic.

Overall I'd say this is definitely the weakest episode of the Game of Thrones series so far, but I am still excited to see what is coming next. And anyway, if you wanted the Game of Thrones game you've bought the Season Pass, so it's no extra money out of your pocket for this episode. I just wish it could have reached the climes of the previous ones, as they were bloody fantastic.
Posted by Danielle at Monday, August 03, 2015