Stealth Inc. 2 is a platformer which sees you play as a cute little clone who has to escape a pretty sinister testing facility.

Much like Q.U.B.E, which I have just reviewed, Stealth Inc. 2 was quite clearly influenced by Portal. Unlike Q.U.B.E though, Stealth Inc. 2 incorporated the snarky attitude of GLaDOS to great effect. Gameplay-wise this game really plays more like a mash up between Super Meat Boy and a real stealth game, in that yes to complete the level you do have to exercise stealth, but fail at this and you will use just as many lives as you did on Super Meat Boy. 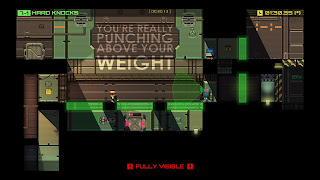 As much as Stealth Inc. 2 bills itself as primarily a stealth game, it doesn't necessarily play like one. I say this because the gameplay can be too fast and frenetic to truly feel like you are playing a game that requires you to take it slow and, well, stealthily. Don't get me wrong you SHOULD approach this game slowly, but with restarts being instant and deaths (at least for  me) being plentiful I found myself hurling my clone around the test chambers as fast as his little legs would go. And dying repeatedly.

When I eventually wised up, I got a lot better at not dying (shocker, huh?). When you stop delighting in hurling your clone to his death time and time again the games stealth aspects can really be brought to the fore. I guess what I'm trying (and failing) to say is that I wish the deaths hadn't been so instant. Pretty much everything can kill you instantly and you restart literally straight away. This mechanic WORKS in games where fast play is a must-have; where you have to get back in instantly otherwise you'll break your controller, but for Stealth Inc. 2 it kinda just removes from the actual purpose of the game, which is to NOT die but escape. 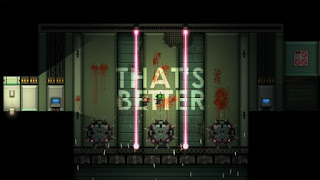 As you progress your clone will gain access to a multitude of cool little gadgets. These are given to you in dribs and drabs, allowing you to master the use of one tool before they let you loose with another. Each tool you are given will, obviously, help you in solving the test chambers to come, but they will also allow you access to previously unaccessible points in the facility. I found myself completely confused by the map however, and I am yet to actually backtrack on purpose (I have done this multiple times accidentally).

Graphically the game is beautiful, in its own way. It's dark and gloomy and awash with a particularly dank shade of green, but it works. The main problem I had with this was that I couldn't really see the screen very well on bright days, I have a huge bay window in my living room and the sun coming in just completely removed the use of my screen for this game. Usually I just have to up the brightness but I couldn't actually up it enough to make Stealth Inc. 2 playable. Luckily I live in Manchester so after our two days of sunshine it was back to the grey clouds we know so well and I was able to play Stealth Inc. 2 again.

You get a fair bit for your money in Stealth Inc. 2. After you've completed the main game there's a pretty robust level editor for you to test out your skills by creating new test chambers. I'll be honest and say this is something I haven't really tried much because this kinda thing just does;t float my boat, but it's there for the rest of you guys!

Overall I'd say Stealth Inc. 2 is a solid addition to the Xbox One games collection. It plays well and the puzzles are challenging enough to make you think, but not so challenging that you'll rage quit. The added bonus of a level editor makes this game slightly better value for money, but I still feel this game would have been more at home in the £9.99 price bracket.